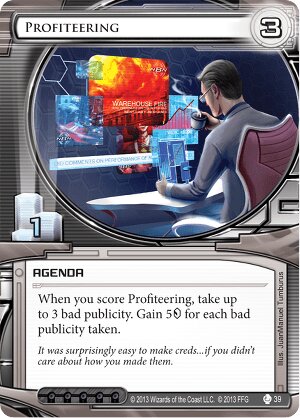 It was surprisingly easy to make creds…if you didn't care about how you made them.
Illustrated by JuanManuel Tumburus
Decklists with this card

Long story short. Profiteering is not a good economy card and a terrible agenda, but it is a burst economy card without peer, it can enable you to pull off expensive stunts a few turns quicker then normal. The trade-off is that it has risks whether you manage to score it or not. It is the tempo opposite of Gila Hands Arcology.

At first I considered Profiteering to be an inefficient agenda. A 1 - 3 that may net you up to 15 and 3 bad pub. It inflates agenda density, costs 3 and 4 to install and score for a "gain" of up to 15 an 1 agenda point, in return the runner gets +(1-3) per run for the rest of the game.

I thought this was bad, it is bad. If you use this thing to net yourself 15 youve spent 3 and 4 (easily worth another 8 credits for a total estimated cost of 11 credits) and in turn the runner gets 3 free per run. A very bad track record compared to a rather similar agenda Geothermal Fracking.

However, this card is still not useless.

It can get you from 3 to 15 in one turn. Kickstarting you from a weak position. Whether you just lost most of your starting credits to Account Siphon or were forced to spend too many to protect an agenda flooded HQ Profiteering might have you covered.

It synergizes with Restructure, the burst will enable you to play Restructure quicker then otherwise possible.

The huge flux can result in you rezzing impractically expensive ice such as Wotan, Janus 1.0 or Heimdall 2.0 and you would still have left. Profiteering synergizes with strong pieces of ice that on their own are taxing enough to run through to trivialize the bad pub. A very notable synergy is Archer, you can gain a huge economic advantage by scoring this agenda and then sacrificing it for Archer, the Archer more then makes up for the bad pub with sheer tax, even if the Archer winds up targetted by Femme Fatale it will still cost 4 to get through it.

Hostile Takeover gains you 7 and 1 bad pub for 3 and 3. Less then half the of Profiteering but at a much lesser bad pub cost, and is scorable from hand.

Geothermal Fracking gains you 14 for 5 and 4, the bad pub is flexible in this case because it does not kick in until you decide you need the , however it is very slow to score.

Melange Mining Corp. nets you 14 for 7 and 1, it has the risk of being trashable but that is a negible downside compared to Profiteering being an agenda. More importantly Melange Mining Corp. has no bad pub. #Melange is also re-occurable via some pretty cool cards like Architect or tutorable quickly via Tech Startup. The most important comparison is that Melange Mining Corp. is MUCH slower due to the heavy investment.

The main problems Profiteering has are that it's essentially an economy card dressed as an agenda. It has 2 risk factors, first that it can be stolen, second that it gives bad pub. Compared to econ cards it is slow and benefits the runner as well as yourself. Compared to agendas it's just a 1-pointer.

Good way's to play it include:

If you dont have an opportunity to use and abuse the advantage you can score it and take no or just 1 bad pub. 5 back for scoring it isnt bad for an agenda and worth taking 1 bad pub.

Install it round 1 behind cheap ETR and an Archer on R&D or HQ, if it survives the round youll have $ to seize the early advantage and feed to rezz Archer with.

(Breaker Bay era)
tsuruki23 55
play this with Haarpsichord Studio, it's just crazy. — say200426 28 May 2015
play this in pre-Clot-era NBN:TWIY (or any NBN:FA, tbh) and it's even crazier ;) — quiciuq 28 May 2015
Don't forgete about Broadcast Square. You take the money while using your already rez SanSan, and let nothing to the Runner. — therealwarrior 8 Jul 2015
According to a ruling on ANCUR, you don't get the money from Profiteering if you prevent the Bad Publicity with Broadcast Square. Not a combo! — Fry 30 Nov 2015
Profiteering is a very powerful agenda, but fortunately also very narrow in its application. It shines in exactly two decks: A massive glacier deck with exactly one remote, or a deck that does not care about bad publicity. You will need to manage the bad publicity very well. A good profiteering deck either only needs money for advancing and some gearcheck ice. Alternatively, it offsets the bad publicity by having horror servers to run into. In which case the agendas ARE the economy asides from operations/melange mining corp. — Severijn 31 Dec 2015