When your turn begins, you may trash Tech Startup. If you do, search R&D for an asset, reveal it, and install it. Shuffle R&D.

"Don't worry. If this one fails, we can start a new one tomorrow."
Neutral • Del Borovic • The Valley 20
All sets:
Links: Decklists | ANCUR 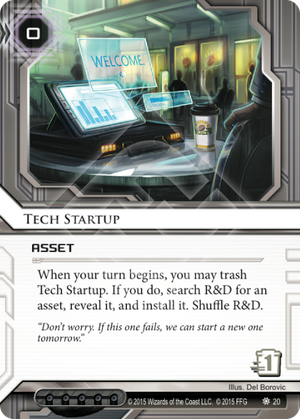 An interesting card. It means that you can much more securely play naked assets - throw this in an open remote, and see if it gets run. If so, no great loss. If not, trash if for the Eve/Toybox/Whatever you wanted it to be.

You can use it to protect your SanSan City Grid if you're really worried - use this instead, then SS at the start of the turn, fast advance.

The real sneaky combo is with Director Haas. Throw Tech Startup in a remote. Start of your turn, trash it for Director Haas. Now you have 4 clicks. Install Accelerated Beta Test. Triple-Advance. Score. Use the Ice to protect Director Haas. Takes a lot of the sting out of her 2 virtual agenda points if you don't have to leave her in a remote until she's helping. And scoring an Accelerated Beta Test + 1-2 Ice means that even if the Runner gets her the next turn, you've both gotten 2 points, but you spent 3 creds and netted some Ice, whereas the Runner just invested credits.

The downside, of course, is that Tech Startup is 1 credit to trash. Anything else you would have installed would either cost more to trash (Daily Business Show, Adonis Campaign, etc) or would have been safe anyway (because the Runner didn't come after it).

Overall, the ability to easily tutor assets, I think, makes this a card to consider. Add something like Hokusai Grid or Hostile Infrastructure to make it more painful and then get whatever it is you need to score!

(Order and Chaos era)
Wookiee 88
Minor nitpick: SanSan City Grid is an upgrade, so it can't be used with Tech Startup. — kevelairn 30 Mar 2015
I think its clearly just a tutor card for corps not running Executive Boot Camp. ^_^ — LynxMegaCorp 30 Mar 2015
It won't work with Eve if you want it to be rezzed on your turn. — Heinrich 30 Mar 2015
Executive Bootcamp rez discount apart, it's hard to tell which one is better as an asset tutor. Tech Startup cost one less credit, and also one less click since Executive bring the tutored asset in your hand, while Tech Startup allow instant install. That said, if you bring a Snare! in your hand just before an access, you don't care to install later. Also, trash cost is strongly in favor of Executive Bootcamp. But Tech Support seems to work greatly with Melange, Campaigns and PAD-like asset. And Director Haas, of course. — Lupus Yonderboi 31 Mar 2015
I recommend #Eliza's Toybox — vjhorse90 8 Apr 2015
@Heinrich, this can work with "Turn begins" assets, as you can rez, fire and rez the tutored asset all in the paid ability window at the end of the runners turn. I like the Haas play, that sounds great - risky though! I think, building on vjhorse's idea, that if you're building a deck that wants to play Eliza's then running a single toybox and 2-3 of these are almost certainly better than 3x ET (dependant on influence of course) or running boot-camps as this leaves you with all 3 clicks in the turn so you can use the ability immediately (same for MMC) — zithith 9 Apr 2015
The Supplier ruling is relevant here. You have to take a 'snapshot' of your installed cards before you begin triggering your "turn begins" abilities. Only cards that were in play when you took the snapshot will trigger. That means that most economy assets (PAD, Sexy Bioroids) won't go off when you install them with this. — Greasythumb 10 Apr 2015
I agree - if you're triggering this card in the "start of turn" window for the corp. BUT you can rez and use this then rez the card tutored at the end of the runner's turn (in the P.A.W. after their final Click - when you know it won't be run) so the assets do give you their benefit — zithith 10 Apr 2015
Apologies, re-read the card. I was thinking in my mind it was [Trash]: — zithith 10 Apr 2015
3

The free install means that this card plays very nicely with any asset that requires/benefits from 3 clicks to use:

Melange Mining Corp. or GRNDL Refinery if you're low on credits

Contract Killer: Murder that advanced Kati Jones or The Supplier out of the blue

Seems like a fairly good card, even 1 credit and 1 click is a fair tax on the runner, but 1 trash in RnD giving a fresh card kind of sucks. I hate to slot this over a copy of something I want anyway. The issue really is slots. Until you want a toolbox of assets, this can stay in the binder. 2/5