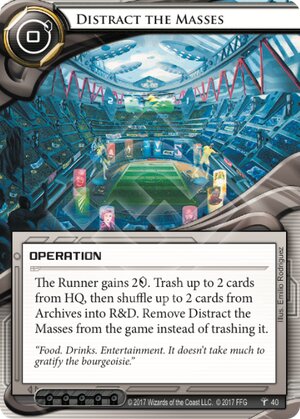 "Food. Drinks. Entertainment. It doesn't take much to gratify the bourgeoisie."
Illustrated by Emilio Rodriguez
Decklists with this card

For newer players joining us post-C2R who have never experienced the god that is Jackson Howard, this card joins the list of many trying to replace the Executive, but which are significantly weaker.

It's not hard to tell why a card that helps un-flood HQ deserves a slot in your deck so let's start comparing if this is the card you want doing that vs. similar cards Preemptive Action and Whampoa Reclamation.

It's one less card to shuffle back into R&D if you're the poor sap that has 3 or more agendas in your starting hand but the advantage here is that you don't have to survive a turn with those 2 agendas in your Archives or using cards that trash from HQ like Reuse. Unfortunately, that's where the good ends as you give the runner a 2 gift instead of possibly baiting the runner to spend clicks running into your ICEd Archives. But hey! It's not a terminal, at least?

You're spending 3 more here but so is the runner to trash this if they know what's good for them. You're also going to get as many or more cards out of HQ with the added benefit of being bottom-ed. Distract the Masses' only advantage here might be saving 2 influence per slot.

Cards that reduce flood are obviously the most useful in the early game and giving 2 to the runner is a hefty tempo swing in their favour that just can't be ignored. But maybe you're rush Jinteki and you already slot x3 Medical Research Fundraiser anyways so this card seems meager in comparison. That is until you realize that a rush deck doesn't want to shuffle away agendas and a non-rush deck can't afford the tempo loss. Overall, I don't see this card replacing what Jackson alternatives we already have. Gotta give it props for the mechanics & flavour though.

(Down the White Nile era)
BlackCherries 351