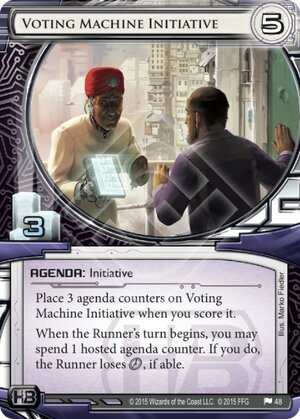 Place 3 agenda counters on Voting Machine Initiative when you score it.

When the Runner's turn begins, you may spend 1 hosted agenda counter. If you do, the Runner loses click, if able.

Illustrated by Marko Fiedler
Decklists with this card

Agenda points and the space that it fills

A big driver for why you would do this is so that you have more space in your deck for cards that you actually need, like ice, Ash 2X3ZB9CY, or money cards.

Before the release of this card, the only in-faction 5/3 that existed was Project Wotan, which filled the space, but it essentially just gained you three credits once the runner's rig was up. So most people don't count it.

Other alternatives for the 5/3 space within HB include Global Food Initiative, Hades Fragment, Utopia Fragment, Eden Fragment, Executive Retreat, and Priority Requisition. The last two aren't really used much, not sure if people count them.

Like all of the 5/3's its hard card to score. You have to dedicate an entire turn (install advance, advance), to setup the score. And then another entire turn to score the card. Granted, you're basically half-way to winning the game. But it did take you two entire turns and 5 entire credits.

It doesn't really protect itself. Which is ultimately why this card isn't used much. The Future Perfect, NAPD Contract, Global Food Initiative all protect themselves and don't give any benefit other than the points.

So in conjunction with Enhanced Login Protocol and a scored Voting Machine Initiative, the runner will only get two clicks turns to run a remote to steal an agenda. You don't want to just spend those counters/the current at any time though.

You want to do it when it matters.

When you've planted a card in your monster remote server, with an Ash 2X3ZB9CY and a ton of money. That way, 1. The runner can't really click through your bioroids. 2. Turing is a monster to break. 3. If they want that 3/2 they have to spend their entire turn getting in, trashing the Ash 2X3ZB9CY and getting in again

... and in the end, it could've just been a Jackson Howard sitting face down, but you make it SEEM like it was an agenda. And at that point you've made them waste significant resources to get through your monster server.

Or if the runner is just unprepared to spend their entire turn to get into the server (usually not because you'll be planning to score that other 3/2) Voting machine initiative basically lets you score that 3/2 no problem.

Personally I like the card. It fills that space that Project Wotan was supposed to fill but doesn't because Project Wotan just forces you to ... waste 3 credits for like two entire turns of effort and gives you three points. At least voting machine initiative helps open those scoring windows after its scored.

Like most politics type things in the Mumbad cycle Voting machine initiative has the theme of wasting time. All the politics cards exist to just cost the runner clicks/time Bio-Ethics Association, Sensie Actors Union, Clone Suffrage Movement, or stall the corp. Like the The Black File, The Price of Freedom, Populist Rally. Things used to prolong the game for just one more turn.

Voting Machine initiative just adds to that by forcing the runner to run into their voting machines...

(Blood Money era)
debraken21 47
Worth pointing out that this agenda synergizes nicely with Heinlein Grid and can force the runner to lose all oftheir credits at the beginning of their run. Depending on the runner and their rig, this could prove devistating, or a minor set back. The way to prevent it would be to run last click. — CactusJack 24 Aug 2016
No it doesn't. — LimiterDrive 23 Oct 2016
1

I wondered for a great time what was going on in this card, until it striked me. It's an initative. And like the Global Food Initiative it's not meant to make money for the Corp or protect the one they already have. It's a favor. And what is the favor? The machines. Hass-Bioroid offered (or more probably, sold for a lower-prices) to the government of India, bioroids that will have to register the votes of everyone in the country. And more importantly, the votes of the poorer people that wouldn't usually go vote. We can see it by the kind of building the guy on the right lives in. Those seems quite old and looks more like modern-vertical "slums" that are starting to appear in China actually. People crammed into huge buildings with even less place to live than if they were in Salsette Slums

Of course, courtesy of HB who would love to see the same poor people who lost their job because of the clones vote against Jinteki.

(Crimson Dust era)
Makyura 2
All this despite providing yet another source of menial labor. Hypocrisy is strong with these people. // Cool review! What do you think is the meaning of this card's ability, flavor-wise? How does registering votes steal clicks from the Runner? — H0tl1ne 28 Aug 2017
"Hello. May I have a moment of your time to discuss the importance of voting during this next election... [Miss Jesminder Sareen]? Please fill out this 40-page survey to assess your eligibility to vote..." — Agenarchi 31 Aug 2017
Well, that's kinda obvious. Silly me. — H0tl1ne 5 Sep 2017