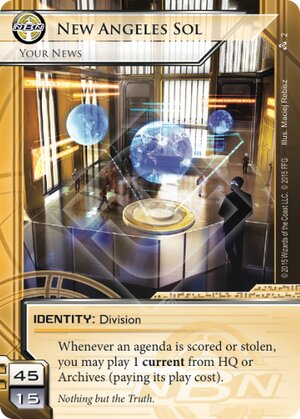 Whenever an agenda is scored or stolen, you may play 1 current from HQ or Archives (paying its play cost).

Nothing but the Truth.
Illustrated by Maciej Rebisz
Decklists with this card

If you play your deck right, New Angeles Sol is a master of control. Currents are cards that add little rules to the boardstate, like Paywall Implementation, and can only be trashed when an agenda is scored (if the current is an event), or stolen (if the current is an operation). Sol basically says "BUNK THAT!" and essentially makes Corp currents untrashable. On top of that, the ID allows the corp to maintain constant control by their own rules. Even if the runner wanted to play their own currents, Sol would have the tools and the NBN speed to quickly disrupt whatever plans the runner had in mind.

Also, News Hound is a wonderful card in this identity.

With the NISEI standard ban of all corp cards with the "current" subtype, we've finally gotten the blank 45/15 ID that NBN has always needed. As everyone knows, this card was very problematic in the meta, and I'm sure we're all glad to see it go.

I've tried out a few takes on this, but lets start with the concrete:

Obviously, you want to have plenty of currents in your deck so your ability is active as reliably as possible. I think the sweet spot is 5-6. However, if you're hemorrhaging agendas/down on money, you need something to play. You need a current that's free. Targeted Marketing just happens to be free. It's perfect, really, because every time any agenda is stolen (or scored if you have a spare) you get to reset it to a new target, so it's rarely dead. So in my opinion, 2-3 Targeted Marketing is a no-brainer.

The first real choice you make is what non-free current to run. There are a lot of good ones. Cerebral Static completely neuters quite a few decks, but is dead against others. It can make for a good 1-of. Enhanced Login Protocol adds a click tax for their runs, which can combine well with Data Ravens. Housekeeping is another big one, a card-tax for installing, slowing down their development. Surveillance Sweep is an option, but its problem is it requires the deck be built around it.

The type of deck you build is open to interpretation, but one possibility is a rush deck that happens to get to run the most efficient ETR sentry in the game (News Hound). Add in Wraparound/Quandary and you have a triumvirate of cheap ETR, and then mix in ways of tearing down the breakers once they come online (Data Raven + Keegan Lane, Archangel, and/or a destroyer like Grim.)

If you're going Surveillance Sweep, you're probably going more of a taxing route, so you can throw in Troll, a much overlooked ice, resulting in an absurd interaction, an ice with no subroutines that fires a trace that the runner starts. You can also throw in Ash 2X3ZB9CY at insane efficiency, since they have to do the trace first. The main trouble you may find is the cost of maintaining the current as agendas are stolen, leaving you in the vulnerable position of either nerfing your ice/strategy or going broke and it no longer mattering. Also unfortunately, most tracing during a run happens off of unbroken sentries, leading to a lopsided ice distribution.

Who knows what possibilities will open up in the future. This ID is sticking around forever.

(Kala Ghoda era)
EnderA 491
What is the timing on the ID ability. Example: -Runner goes for archives -Predictive Algorithm current in play -3 NAPD contracts in there -Runner pays 6 to steal the first one -Does the ID put back the current before he can steal the rest? — FunkeXMix 2 May 2016
Yes! Despite accessing all the cards in Archives, you choose the order you access and resolve the accesses one by one. If an effect triggers another, then it initiates a chain reaction, which immediately resolves the newly triggered ability. — ashtaroth 28 Jun 2016