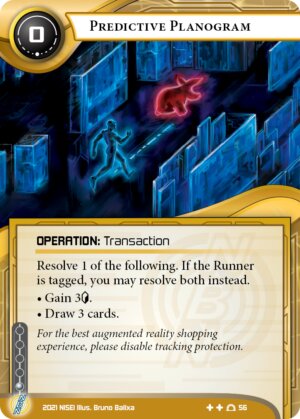 Resolve 1 of the following. If the Runner is tagged, you may resolve both instead.

This card has mostly flown under the radar. As of this review, the full set hasn’t been revealed yet, and we’re still in the midst Jnet spoiler games.

At worst its Beanstalk Royalties or Anonymous Tip. Usually, you’ll just take 3 creds, but the flexibility is valuable, ignoring the tag bonus. Would this be playable as just a flexible BR/AT? Probably not, but when the runner is tagged, it turns out operation speed Rashida, especially with our new filtering tools, is kinda busted.

There are so many ways to tag the runner now, and runners are highly incentivized to float at least one tag. If they aren’t floating any tags, chances are they’re playing too slowly to beat you anyway. Play Reality Plus with some of the new ice, maybe ARES and some Prisecs/AMAZE Amusements. Use Predictive Planograms and go lightning fast through your deck while gaining money. Find PsychoBeale or Boom for the victory. And, if for whatever reason you can’t force the runner to float a tag, using Public Trail for value is still nice. If you’re worried about agenda flood, don’t be. Spin Doctor will fix your agendas the moment it gets bad. Seriously, play this card in your R+ deck.