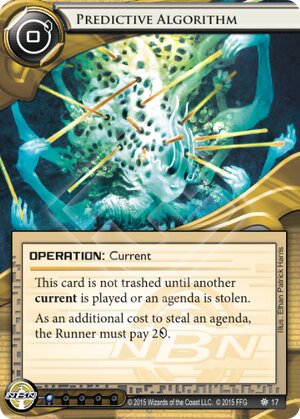 As an additional cost to steal an agenda, the Runner must pay 2credit.

The last reviews for this card were in mid-2015 and they politely said "hey, maybe you could consider playing this card in a few lists, but this card is kiiiiinda garbage." And that is still sort of true, but Predictive Algorithm got a gigantic boost in last 2015: Data and Destiny dropped, and New Angeles Sol: Your News got printed.

There's a lot of shenanigans you can get into with this. Combine Predictive Algorithm with Red Herrings and it is possible the runner just doesn't have the money to take your agenda. Red Herrings generally isn't reliable enough to be a solid defensive upgrade, but Predictive Algorithm makes it a lot more viable. Additionally, NBN has a handful of agendas that do something nice for you whenever the runner accesses them, like Explode-a-palooza, TGTBT, and Award Bait. Predictive Algorith helps you put the runner in situations where they might access agenda and yet be unable to take it, letting you get 5 off your Explode-a-palooza without giving up agenda points. Neat trick. Just hope they don't have Film Critic.

With Temüjin Contract, runner economies are kind of bananas right now. Predictive Algorithm is probably ESPECIALLY not great right now. But it's still a decent effect.

(Martial Law era)
Sanjay 3532
I love this current, in Sol anyway. One of my favorite decks has 16 agendas in it with this being the main current. I personally do not care for Targeted Marketing at all. Everyone raves about it, but I just don't care for it. Every time it has been played against me, except once, I just was like, "Great, thanks for wasting a click." The pool of cards is so large, that it can be very difficult to pick a card that the runner is using. Now, I do play exclusively online and am constantly trying out new decks. Tournament players probably do find it better. I'm sure most players stick with what is tried and true, so it will be much easier to utilize in that setting. — quailman2101 8 Dec 2016
Making Predictive Algorithm do more work by putting it in a deck with lots of tiny agendas is a really cool concept. I just looked at the list you published. It looks fun! — Sanjay 8 Dec 2016
I have used this in iterations of my Spark deck (which I think is its most natural home) and may test it out again, given that Spark has gotten a huge boost with Free Lunch, CPC Generator and the upcoming Marilyn Campaign. Stacks with NAPD Contract, which is a nice bonus. My Spark game plan is to keep them below a certain threshold, such that even if they can get in somewhere, they will be broke. I'm happy to sacrifice an agenda if they go broke getting it, since that opens a scoring window. This just adds to the sting AND sometimes flat out stops them stealing (since with Spark you can often control their exact credit pool and ding them down before they are about to access). — syntaxbad 28 Mar 2017
2

A current that I think doesn't yet have the deck to go with it.

In general I believe Predictive Algorithm will be a current that works exceptionally well for Harpsichord Studios, the upcoming NBN ID that only allows one agenda to be stolen per turn, in a deck filled with the ever expanding suite of NBN agendas that NBN doesn't mind being accessed.

In this deck it'd have the advantage of being cheaper than man hunt as a way to turn off potentially nasty runner currents (such as Hacktivist meeting), make any rush style play put more pressure on the runner (as they'll need to find 2 extra credits in addition to drawing for breakers) and can provide big swings when things like TGTBT's and explodapalooza are accessed but the runner can't afford to steal them.

While turning the next agenda stolen into a mini NAPD might not be the most valuable effect in a faction full of currents with more teeth; Predictive Algorithm might find a place in niche decks and as a cheap current for decks that just want an easy off switch for Runner currents.

(Breaker Bay era)
AlbinoBunny 3
There are decks in my meta that focus on high taxes and difficult-to-steal agendas; one PE comes to mind that runs with Fetal AI, Future Perfect, Utopia Shard, and NAPD. Adding two more credits on top of these already pricy agendas would, I think, be brutal - especially as it targets runner currents. I don't, however, think NBN really has the oomph in-faction the way Jenteki does to maximize the card. — Shannon.L 21 May 2015
I think the issue with the out of faction idea is that I'm not convinced the effect is strong enough to make it worth springing the influence for. Though considering PE doesn't (at least off the top of my head) really have a current it runs naturally PA might work in a current heavy meta. — AlbinoBunny 21 May 2015
1

In a deck that is all tax, like RP tends to be, this is icing on the cake, and is quite oppressive when played. If you're not already burning hanging influence, its a good way to do it in RP. An agenda spread of NAPD, Fetal and TFP makes PA quite good. With NBN, adding herrings, rsvp, ash, bandwidth and UCF and other taxers. this can bring in glacier NBN. Its not the greatest, but free is a tough price to argue against.

(The Valley era)
x3r0h0ur 8803
From a purely tax perspective, the price (influence + credit cost) is really the only thing it has going for it compared to Enhanced Login Protocol. — Bigguyforyou518 10 Apr 2015
The problem with just splashing this card is that it will probably only do its job once: the moment the runner accesses an agenda and steals it; since the current is then trashed. This is why I believe that for PA to be useful, you need to actually build a deck around making it survive and allow it to do its job more than once. — benticurus 10 Apr 2015
1

The deck needs to be built around this card in order to make it work, one cannot just splash it anywhere since it would only be useful the one time the runner access an agenda and needs an extra 2 credits to steal. I suspect that it would presently be best in Industrial Genomics: Growing Solutions.

One can make a runner fall on a Fetal AI and have to pay a total of 4 credits to steal it on top of the 2 net dmg. But in a Genomics deck that protects its Red Herrings with absurd trash costs, if combined with Red Herrings, Genomics can make stealing a naked Fetal AI way more expensive than expected. Imagine a scenario with Predictive Algorithm out and also having one server with Hokusai Grid, Red Herrings and Fetal AI. That would be 9 credits and 3 net damage without counting any of ice in the server.