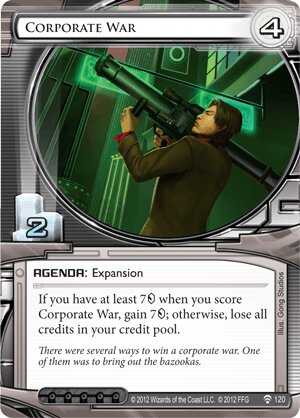 If you have at least 7credit when you score Corporate War, gain 7credit; otherwise, lose all credits in your credit pool.

There were several ways to win a corporate war. One of them was to bring out the bazookas.
Illustrated by Gong Studios
Decklists with this card

I wanted to like this card for a long time, but have finally concluded that I cannot (at least not in competitive decks). This card falls into a 'win harder' category, which looks useful at first, but in play can quickly become a liability.

The simplest way to describe my complaint is this: When the corp has only 6 credits or less, losing those credits can cripple the player at least temporarily; when the corp has 7+ credits, an extra credits are nice, but don't really change the game in a big way.

Losing all the corp credits when scoring an agenda leaves the corp wide open to attacks on any unrezzed ICE and assets, with very few means of responding. Rebuilding from 0 credits is often a slow process, which many runners take advantage of and will trash any corp economy they can to maintain. Such a corp may not see another scoring window for many turns depending on the runner.

Gaining 7 credits is powerful; even better than a Hedge Fund, but the corp can already rez most ICE with 7-8 credits, gaining to 14-15 credits brings Janus 1.0 and Wotan into the possibility, but servers were already dangerous to the runner. Frankly, for most corps, scoring at 7+ credits often means that they will be able to chain into their next scoring window in 1-2 turns, even without the addition of another 7 credits.

In summary, this card only really helps the corp when they are already winning, and probably don't need help, but hurts them very badly if they are not cash-flush when they score. Great for a laugh, but does not belong in any serious deck.

A very interesting card. It immediately seems less impressive compared to the ever popular NAPD Contract. However with the advent of Film Critic this card may find a place in a big-money corp deck. It essentially works like the Oaktown Renovation in Weyland allowing you to score out an agenda without losing tempo. It's potential to swing even more money into corporate coffers is best seen in a deck with a lot of economy. For example, big money HB or even within a glacier style Jinteki. This card could be considered to be a win-more card, however the ability to turn scoring an agenda into a credit profit should not be underestimated for a deck that can take advantage of that with some big ICE.

(Old Hollywood era)
utheran 15
I'm doubtful that Film Critic alone will make NAPD less attractive. it's only a minor hate card that still results in tempo loss for the Runner. — nickv2002 20 Aug 2015
But, of course, we'll have to wait and see. Corporate War always did seem to be on the verge of playability for glacier/big money decks. — nickv2002 20 Aug 2015
@nickv2002 NAPD is dead. i'd rather run this for a chance at gaining credits than watch NAPD get stolen by film critic again. it's a MAJOR hate card that completely changes the meta. — 153351 20 Aug 2015
Corporate war is a better agenda than it looks. Yes, the agenda does have its drawback, but that just means you cannot play it in any deck. This card belongs in a big money deck, with agendas such as profiteering. If you make having 11+ creds relatively easy, this card becomes an economy card, which on its turn frees up deckslots and prolongs the scoring window.. — Severijn 31 Dec 2015
In a Jinteki shell game deck this is also really nice. You mushin it or slow advance it to 4 next to your Ronins, Junebugs and CerebrO's and fire it when you need the money. Works like a small, inf-free GRNDL refinery that gives you points. — Hongkong Koma 14 Jan 2016