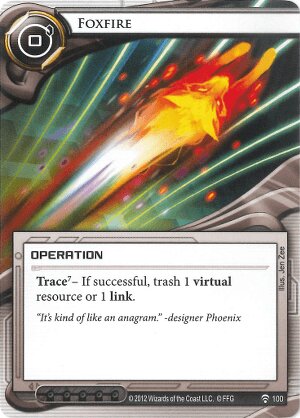 "It's kind of like an anagram." -designer Phoenix
Illustrated by Jen Zee
Decklists with this card

TIL Snazzy Supercomputers, Ferraris and some fakin' Whizzard wannabe aren't "Link" despite providing , but some faultless sods are. Rich people have ALL the problems.

TI-also-L, Alfred isn't a bioroid and who the hell is Ronald Five?!

While we're at it, let me use throw in that completely original joke that Adam can pass my ice but I can't rez him.

(Intervention era)
Shade Delano 11
I'll have to agree with the disdain towards lack of proper typing. — LynxMegaCorp 25 Nov 2016
6

This card suffers from the "50th card" syndrome. That is, it's the kind of card you really wish you could put into your deck...but that would mean taking something better out.

At the moment, the greatest benefit of Foxfire is econ denial for drip economies. With a trace of 7, you're basically guaranteed to burn away their Dyson Mem Chips or Access to Globalsec, hopefully deactivating their Underworld Contacts, or destroying one of their Data Folding for a similar effect. These cards are definitely seeing play alongside The Supplier. I expect to see more in the near future, as Off-Campus Apartment speeds up the setup time for UC-based decks, and people experiment with the Criminal cloud suite (Spike et. al)

There are other things Foxfire can be used for as well. If the runner doesn't immediately use one of their Shards, you can remove those. We've seen at least one moderately successful build using Woman in the Red Dress; if something like that is floating around your meta, you might consider this card. Stealth is still pretty common, and Ghost Runner is a valid target, although it might not be worth the click to trash it, even for free. And the Anarch deep-dig archetype sometimes relies heavily on Virus Breeding Ground, which can be removed with the Fox.

But by the time you slot in your agendas, your ICE, and your economy, most decks only have an extremely limited number of slots left for utility cards and counter-plays. These are usually the most competitive slots, because these are the cards that give your deck the most personality and uniqueness. Do you run IT Department, or Corporate Troubleshooter? Hostile Infrastructure or Psychic Field? These cards are the connective tissue that makes your pile of cards into a cohesive game plan.

And Foxfire...just doesn't fit any of that. It's annoying to certain runners, in some matchups. Is it worth putting in just for that? Over, say, Cyberdex Virus Suite, which is similarly situational but utterly crippling to the runner when it matters most? At the moment, the top two decks on NRDB which use Foxfire are joke/theme decks, so the general consensus seems to be "no".

Perhaps, in a future set, some virtual resource will get released that some corps just cannot deal with any other way. Maybe there will be some uber-link card that gives the runner something like 3 with a single link. If something like that happens, I could see Foxfire coming back. Until then, though, it will sit lonely in the binder alongside Bad Times and Freelancer.

(Breaker Bay era)
tiedyedvortex 4646
Or an id that lets you sideboard — cmcadvanced 9 May 2015
Could be useful against Apex, if it gets more play. — CactusJack 11 Feb 2016
Will surely see use if Black List becomes a big thing in your local meta — lunchmoney 14 Apr 2016
"Perhaps, in a future set, some virtual resource will get released that some corps just cannot deal with any other way. " — weylandcon 3 Oct 2016
I think it has happened @weylandcon Net Mercur is stupidly good. I think this or Voter Intimidation is a good include. — quailman2101 11 Nov 2016
2

So I don't know what the meta is like elsewhere and I don't play in tournaments, but if you're like me and you've found yourself facing The Turning Wheel + Snitch + Au Revoir in every second runner deck on jinteki.net then this may be the card for you assuming you don't have an easy way to tag the runner. This card is a decent, no influence (the most important part of the deal for me) solution to a problem that is quickly making me forget that faust ever existed and dare I say it, almost making me want to play against anarchs again. Almost. I can only hope this phase will pass quickly.

NBN doesn't need it, I don't know the HB or Jinteki card pool well enough to say if there's a better solution for them, but my beloved weyland has problems with it unless you want to use Corporate Town or import tagging devices from NBN.

The card is not great against anything else, but these decks are such a pain I think I'm going to have to start using it. The one other main potential use for it would be trashing the link of a fully set up runner using cloud breakers and the above combo; he'd suddenly find himself (assuming they're on 2 link) having to destroy a few things, but I doubt that's a common enough case for it.

Edit: another, in many ways better, solution to snitch is executive boot camp, as snitch can only be used on unrezzed ice. As a general use card both corp town and boot camp are vastly superior but foxfire has some advantages as a silver bullet: 1: it's an operation so it can't be trashed (in general) 2: it can also seriously disrupt their economy/breaker suite by destroying 1 link and causing their cloud breaker to start using memory.