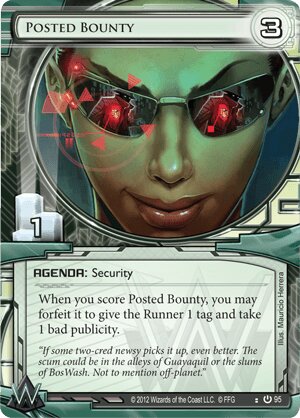 When you score Posted Bounty, you may forfeit it to give the Runner 1 tag and take 1 bad publicity.

"If some two-cred newsy picks it up, even better. The scum could be in the alleys of Guayaquil of the slums of BosWash. Not to mention off-planet."
Illustrated by Mauricio Herrera
Decklists with this card

While Posted Bounty received some use early on as a way to tag the runner for the Bagging that would come shortly after, it unfortunately suffers from a lot of problems to make it a worthwhile card. First off, as a three for one, it must be advanced over two turns to score it. While that could mean a score, Scorched Earth Scorched Earth combo on the second turn, it also requires a scoring window. Then because the corp must wait for a window, it sits in HQ where it can easily be stolen, messing up the plan.

Second, it must be forfeited immediately when scored, so if the rest of the kill combo is not in hand, then it is a hefty price - not only a lost potential agenda point, but a Bad pub that will make scoring future agendas harder.

That being said, the right playstyle around it can work - If say a SEA Source was in hand with the two Scorched, it could be used as bait. The runner heads down a taxing remote, and steals the agenda that was IAA’d. Then they are too low on credits to stop the SEA Source. Or if they don’t run down, advance, score, scorch scorch. That is a four card combo however, which makes it tricky.

This is not a card comfortable to use. The two most appropriate ways to do so is either to keep it triple-advanced and seemingly forgotten on the table (posing as some failed trap, but in order to make the bluff work you'd need to import and use some of actual Jinteki/Haas traps in your deck... or some Mushin No Shin)? - until the time is right and risk being stolen by a particularily curious Runner... But then, you can somehow mitigate the risk by running it in an Argus Security: Protection Guaranteed deck, to tax the Runner messing with your crap...

...or splash 24/7 News Cycle, score early, fire when required, paying with some Hostile Takeovers. This should work as well.

Despite its lack of comfort, I love this card. But I've been known for having a less-than-healthy crush on Molly Millions, so...

(Kala Ghoda era)
H0tl1ne 399
card allows à great - in the pre-film critic world - with midseasons : — Him 29 Feb 2016
install - advance - advance. — Him 29 Feb 2016
install - advance - advance. next turn: if stolen: midseason, double scorch. If not stolen: advance and score, double scorch. — Him 29 Feb 2016
Got a win at a recent store championship with this. Mushin, if they don't run just let it sit. Eventually scorches show up. Score and fire as many time as needed. One of the few kills that'll can get a rich runner on 5 cards and a plascrete. — Waltzard 1 Mar 2016