Hadrian's Wall can be advanced and has +1 strength for each advancement token on it.

"He had a bit of an ego, ol' Hadrian. His constructs live up to it though." -g00ru
Weyland Consortium • Liiga Smilshkalne • System Core 2019 132
All sets:
Links: Decklists | ANCUR 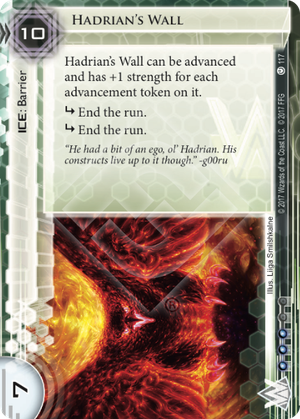 As an advanceable piece of ICE, Hadrian’s is the big guy, the tall and strong barrier. Two subroutines makes it taxing even for those breakers with high strength, and the ability to advance it means that it can always get more taxing.

So why doesn’t Hadrian’s see more play? As a taxing barrier goes, it is phenomenal, taxing breakers for (usually) six plus credits. It is hard to get out, and that is a problem - getting to ten credits can be an issue, and advancing it after it’s rezzed can be hard to do because of the cost to rez it. Other big barriers are at time even more taxing - Curtain Wall can tax even more for only a Hedge Fund more worth of credits, Asteroid Belt taxes less but can potentially be free. Tricks to rez it, like Oversight AI can leave it vulnerable with only the two subroutines, though a Priority Requisition can be very nice to target Hadrians with, it is hard to score such a five for three without the big status of the wall first. It is smack dab in the middle, and as with a lot of the variety of similar cards, the ones in the middle of the pack get used least.

Hadrian’s Wall is posed to make a comeback though. Gone are the days where Corroder was the only fracter needed. As runners start to make use of token based breakers like Cerberus "Lady" H1 or even D4v1d, Hadrian’s could make a comeback. Only one token for Lady, but four credits is still a respectable tax. D4v1d takes an even harder hit, using two of its tokens just to get through Hadrian’s wall. That is pretty respectable.