Play only if the Runner trashed at least 1 Corp card during his or her last turn.

The Runner has 3 fewer click to spend during his or her next turn. The Runner may immediately suffer 1 brain damage to prevent this. Remove Riot Suppression from the game instead of trashing it. 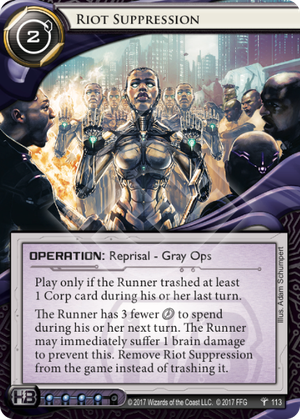 As stated time and time again, giving runners a choice as to which part of a corp card to resolve usually makes the card clunky at best and garbage at worst. So which of the two is Riot Surpression, or is it simply ok?

The condition is easy enough to meet. Especially if you run an asset economy, the runner will likely trash a card at some point. For two credits, you either get to hit the runner in the brain, without trace being involved. OR you take away three of their clicks on their next turn, potentially giving you a scoring window.

If played by itself, the runner will very likely opt to just take it on the chin. Heck, these crazy hackers willfully hurt their brains often. There is now a critical mass of brain damage cards though, and hitting the runner with this, a Tempus and maybe 1 or 2 Self-Destruct Chips has potential to get them in problem. These types of decks are just not competitive though, not even with all their new toys. And I don't think this card changes all that.

Outside of HB this card has some application. A smaller handsize is always dangerous vs Jinteki and now in Weyland this card can either make yourself more vulnerable to High-Profile Target or you are giving yourself only one click next turn to clear Hard-Hitting News tags. Problem is though, these factions already have better tools for the job. And especially at 4 influence, this is a hard sell.

So yeah, like most brain damage related card, this probably belongs in the jank pile. Poor Cybernetics Division, you will never be tier 1.