The first time you make a successful run on a central server each turn, you may force the Corp to draw 1 card. 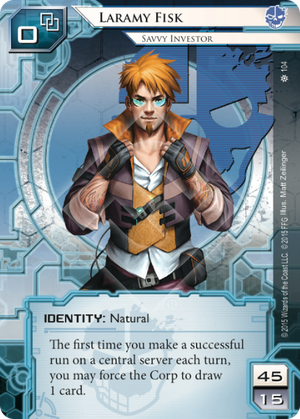 Goatee, glasses, these awesome fingerless gloves, cool style. Rarely seen played. No review. Why? No idea, because this guy is the Criminal equivalent of Noise!

Not precisely, though, as executing his ID ability properly is a lot trickier than just throwing five hundred viruses on board. There are a few differences. Cards go to HQ, not Archives. This, as everything in this game except Jackoff Coward, has both its downsides and upsides:

(+) Under proper conditions and with some early pressure on economy, paired with Fisk Investment Seminar, the trademark move of our man, you are indeed able to flood the HQ with cards Corporate cannot play, which is sometimes enough to throw him off and get him to start panicking, not playing reasonably, and if you are really lucky, some agendas will fall to the Archives, where you can easily snatch them - very Noise-like!

(+) Psychological pressure is one of the biggest upsides of playing as this guy. If you manage to ruin Corp's economy early and then flood him, he will have not one, but two pressing problems he would have to solve at the same time. Laramy's own ability makes it easier to keep this pressure high. And if the Corp has his hand full most of the time, you might as well install Vigil and get some draw out yourself!

(+) Your ability, instead of being virus-related, is linked to what Criminals do best: run like hell, attack the central servers. This promotes aggressive playstyle, a trademark of Criminal Runners.

(-) The same ability is restricted to activating once per turn. No spamming, which you could do with Noise, which is what makes the overall milling ability not particulary huge, up to one every turn. But look at it this way - if you could spam card draw for Corps by merely running Archives, every single one would get absolutely hammered. And we have enough cards around that ruin the game for everyone by being plain unbalanced.

(-) If you don't like your early loot from attacking unprotected R&D, you can't get it out of the way as Noise would do installing a Virus - forcing the Corp to draw has to happen on your first succesful central run each turn.

(-) If you don't do your thing right, for example when HQ is not full and you are not about to Legwork it anyways, you are going to help the Corp instead of hindering him. Laramy had a cool flavor text which didn't make it to the final version of the card: "Timing is everything". In this instance, it couldn't have been more true. Timing is everything when forcing the Corp to draw cards.

I made the earlier comparison to Noise not by an accident. Let me explain. Corp draws one card each turn. With Laramy, he might draw two. That would mean he'd had to spend two clicks at least playing cards from his hand to neutralize the cards flowing in, and three - his whole turn - to reduce the total number of cards in HQ by one. If you play aggresively and make him run out of cash (either Siphons or just trashing assets that would give him money, or forcing him to rez vital ICE), he begins to throw lots of stuff into his Archives. The goal is to make that happen, just like with early Noise. Make lots of stuff go to Archives - focus on trashing economy assets. Basically, play like an Anarch would. And don't forget to bring along a Hades Shard!

Laramy's ability is unique and interesting, but I think he is still in need for something. Something that would shoot him towards the sky. Do not dismiss him yet - since timing is everything, he is just waiting for the best possible moment to strike and turn the meta upside down!

EDIT: After a thorough research, I'd like to add this - Fisk Investment Seminar is still your main HQ overdrive tool, as it is very hard to accomplish it by ID alone. Though it is worth mentioning that with Larry's ability used frequently, FIS nearly always seems to do its job just right. Funny.

Throwing in one Apocalypse was about as good as I thought it'd be - which is freaking awesome. If you are sure that the situation will 100% let you execute it, try this ultimate dick move: make them draw and play even more and more and more assets, then just go all-in and apoc. This is what Laramy should do - pretend to help the Corp, then in the most appropriate moment take it all away! Of course, once everything is gone, stop allowing them to draw more cards. Why would you?

EDIT: There's this big card out in Escalation, Find the Truth. If you can afford the influence cost (which you probably can't), this feels like a natural way to amplify your ID ability. Not that it does make this ID viable by any means, but...

(Business First era)
H0tl1ne 368
I think the issue is that his strategy depends on both wrecking Corp econ and flooding out his hand. A gear-checker and a Crisium Grid over HQ slow him down. Plus, horizontal Asset Spam decks rather enjoy being Fisk'd, at least mine does. Councilman/Plop will help there I think - but the general idea of 'break then Fisk' can be easily imported to other Runners with a better built in advantage that doesn't go all-in on one strategy. — GrantZilla1979 18 Mar 2016
Perhaps you are right. LF might be considered a high risk, high reward ID solely because of this dedication to one gimmick, that also requires a secondary gimmick to work. But if you manage to stick both econ crash and HQ flood, the match is pretty much won. As per Asset Spam, I suppose the same would be true for every archetype that just installs a lot of things and likes to have a lot of cards. It's a great tactics against a common glacier though. — H0tl1ne 18 Mar 2016
Also, splashing a single Apocalypse while simultaneously letting the Corp spam assets might yield some crazy results. Fisk giveth, fisk taketh... — H0tl1ne 18 Mar 2016
It seems like one problem is that you don't really know if his ability is good or bad. You never really get to see unless your opponent tells you. — FightingWalloon 29 Oct 2016
Well said. — H0tl1ne 1 Nov 2016