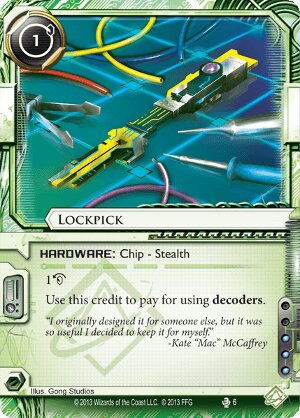 Use this credit to pay for using decoders.

"I originally designed it for someone else, but it was so useful I decided to keep it for myself." -Kate "Mac" McCaffrey
Illustrated by Gong Studios
Decklists with this card

A few months back when everyone was just trying out Order and Chaos, I was playing a Kit Refractor deck and of course this card made a showing. I was going to make a run every turn unless something went wrong and I was going to use Refractor on that run cause, it would be the cheapest easiest way to complete whatever run I was making, so every turn this was a free clickless credit. If I had out 2, I could facecheck a Fenris or Nebula without breaking a sweat.

Of course, Refractor also means that unless you have two of these something as simple as a Orion over a Wormhole meant you needed to have another set of stealth credits... so I moved on to try a few other things.

Cyber-Cypher for example, could pound through just as hard as Refractor. But I left Lockpick in because although stealth isn't important for it, it still is a free break per turn on most early game ice and still useful later in.

And that go more more than just Kit. unless you are using Yog.0, any shaper who has space and could use a little econ can make use of this.

Let lets talk about the ones who use it best.

Besides Kit, Kate makes it turn a profit on it's second run that sees a code gate. Nasir can see it as insurance for those times when the corp Rezes a Pop-up Window and you need just one credit not in your pool to break the subroutine. Hayley can use it as an easy way to get hardware from her hand for free during a run without being behind in her econ. And if nothing else it's a cheap and easy Power Shutdown target to keep your Astrolabe safe.

At three influence, using it outside shaper is a little rough, but if you are already playing shaper, it's an easy sell.

(The Underway era)
Goldstep 93
Also has excellent synergy with Study Guide. — FarCryFromHuman 20 Jul 2015
I would agree -- two lockpicks means you can buff study guide once a turn for free if you didn't run or break two subroutines if you did... but since I haven't actually ed tried it yet, I figured I should leave someone else to point it out. Thanks FarCry! — Goldstep 22 Jul 2015