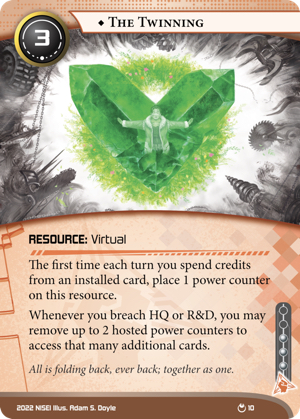 The first time each turn you spend credits from an installed card, place 1 power counter on this resource.

Whenever you breach HQ or R&D, you may remove up to 2 hosted power counters to access that many additional cards.

All is folding back, ever back; together as one.
Illustrated by Adam S. Doyle
Decklists with this card

Anarch Turning Wheel? Seems like a reasonable replacement with slightly greater deckbuilding constraints, influence limits and higher cost. I expect it in some Hoshiko / companion and Cezve builds.

More words to be written, this is a filler sentence.

Both Cezve and this card cost 3 inf, and Criminal already have multi-access tools, so this cards is unlikely to be added in Cezve builds.

First of all, just want to say that I really love the theme and art of this card. Nice to see a very non-nihilistic theme on an Anarch card.

I think The Twinning is going to be very strong, and used across factions. As pointed out it is similar to The Turning Wheel, but has a bit of a different cadence to it.

The Twinning will gain counters when used with cards like the four anarch companions, Scrubber, Paricia, Cezve, Penumbral Toolkit, Prepaid VoicePAD, Mantle, Net Mercur (but not Smoke--she's not installed), and Flame-out.

Also, because it uses power counters, it can also be charged with cards like Daeg, Stoneship Chart Room, Into the Depths, and of course, Captain Padma.

With all of these synergies I think that it could be argued that The Twinning has a home in each faction. If you use a companion and then use Cezve during a run the next turn, you have just earned either a Legwork or The Maker's Eye. This card can gain a lot of counters over just a few turns and release them in huge onslaughts in the end game on R&D and HQ. It will be slightly less bursty than The Turning Wheel as the accesses are limited to +2/run, but at an exchange rate of +1 access per power counter it will easily be able to provide a steady stream of additional accesses. My guess is it will be a strong multi-access build-around card, or could be something that can just be slotted as a 1-of if you have the influence to spare.

Also, it combos nicely with Divide and Conquer. :D

Is that a picture of the new Shaper Padma in the crystal and if so is that the same crystal she's running on her runner identity??

It is not. The runner depicted in the center is Esâ Afontov: Eco-Insurrectionist.