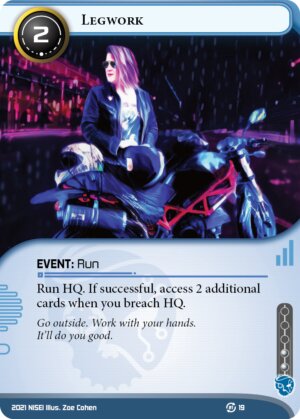 Go outside. Work with your hands. It'll do you good.
Illustrated by Zoe Cohen
Decklists with this card

(Data and Destiny era)
Zanc 94
I actually think a better time is when the Corp is sitting on 3 or fewer cards and you suspect they're holding agendas. If you're able to hit HQ twice in one turn, the Utopia Shard - Legwork - Archives combo can be strong in the early game. — GrantZilla1979 29 Dec 2015
One upside of HQ Interface over Legwork is that it works even during Sneakdoor Beta runs. — Blackhaven 20 Feb 2019
Although, every piece of ICE that goes to Archives because of Sneakdoor probably makes the Legwork runs that much cheaper. — Blackhaven 20 Feb 2019
3

Legwork is a card with a powerful effect that really competes for slots in a Startup deck. Looking at 3 cards in HQ is really quite nice, since it means it's more likely than not that if there is an agenda in there, you will get to see it. You'll also get to see most of the corp's upcoming gameplan. Downside is that it costs 2creds, 2 influence, and if you only look at a bunch of ice it doesn't actually give you much information. Also if the corp is only sitting at 3 cards, it's more access than is even necessary.

Your main competitors are Docklands Pass and Jailbreak. The pass can actually combo really well with legwork, letting you see a whopping 4 cards, which can be great if you feel the corp is getting Agenda screwed or is really planning something big next turn. However, getting that persistent additional HQ access is probably worth more to most decks than a slightly larger burst access turn. Jailbreak is a more interesting comparison. You're getting to access one less card, in exchange for drawing a card if successful, the run being free, and having the flexibility to target either HQ or R&D, and costing no influence. It's a lot of advantages to Jailbreak, and I would most decks who are interested in getting additional multi-access to go for Jailbreak first, and then Docklands Pass. However, it's hard to beat the sheer burst access of Legwork, so I would except many runners to still run a copy alongside the above mentioned tools, especially in run heavy event decks like Ken "Express" Tenma: Disappeared Clone, or in Zahya Sadeghi: Versatile Smuggler where the extra access will pay for themselves, making this card free.

Outside of crim, this card can be useful in Anarch who's going trash heavy with René "Loup" Arcemont: Party Animal and/or Imp, really robbing the corp of some options. Generally I wouldn't except to see it too much in shaper, where you have lots of excellent R&D multi-access tools, and would expect for runners to spend their 2 influence on the pass and using jailbreak over this.