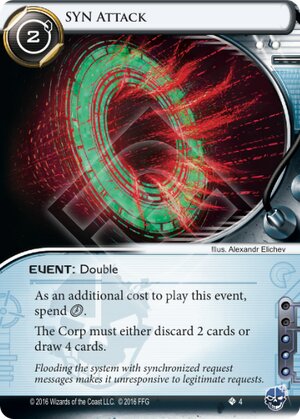 The Corp must either discard 2 cards or draw 4 cards.

Flooding the system with synchronized request messages makes it unresponsive to legitimate requests.
Illustrated by Alexandr Elichev
Decklists with this card

SYN Attack is a card to increase the important-card density of HQ. Assuming you play it correctly it gives the corp a choice between two bad things: remove the two least valuable (since corp chooses) cards from HQ or draw 4 cards and be forced to remove at most X least valuable cards from HQ at the end of their turn, where X is the current hand size (assuming a normal HQ size they can keep 5 but SYN attack plus mandatory draw makes them have drawn 5 after their next mandatory draw).

How well SYN Attack works depends strongly on how many cards the corp has in HQ and how many they can use in their next turn. In a fairly pessimistic scenario the corp can play or install 2 cards from HQ during their turn. That makes the following calculation:

Of course from 2 cards in HQ upwards there's no guarantee what a corp will choose. That actually can work to your advantage. For example if the corp has 5 cards but chooses to draw you might infer that either they have a hand full of cards that they absolutely don't dare discard (e.g. agendas) or that they're hunting for something in R&D.

Regardless of what the corp chooses there is a very large chance that the average value to the corp of the cards in HQ increases. The more the corp has to discard the greater that value increase will be.

As you've probably noticed by now SYN Attack is one of those cards that involve deep thinking by both players. I personally like the trend towards opponent-choice and mindgame cards from a game enjoyment perspective though it does make individual cards less reliable. Any card that gives your opponent a choice requires more skill than say Sure Gamble. If you can find just the right time to play it however SYN Attack can mess with your opponent's plans in a way that's hard to cancel. Just watch out for Jackson Howard.

I absolutely love this card for the same reason I love Fisk. Kind of awful, sometimes works against you but always fun.

Opponents are always trying to maximize their value, at every decision step.

Cards that give your opponents choices always entail your opponent choosing whatever is the worst option for you unless you are able to surprise punish the choice that appears to be the worst for you.

If you try to be sneaky and you spring some trap that makes the opponent wish they had chosen the other option, well then you are just playing a bad combo deck.

Speaking as the opponent here, when you play this, you are using 5 resources units (draw, 2 credits, 2 clicks) to give me 4 free clicks (draw x4). At face value, that's a 9 resource swing in the wrong direction for the runner. Why would you play that, do you want me to win the game?

Whatever tricky thing you are doing with this card, it's probably not worth putting yourself at a 9 resource disadvantage by playing it.

IMHO, just play good cards instead of this.