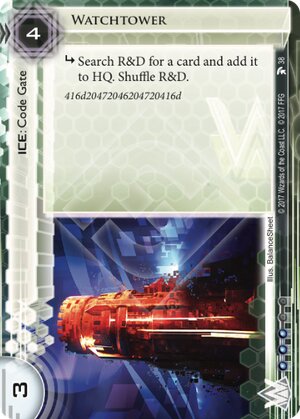 subroutine Search R&D for a card and add it to HQ. Shuffle R&D.

"Sir Weyland, the runner is nearly at the gates; the men are growing restless. What is your command?"

"Fear not Sir Lancelot, this operation was nothing more than a Honeyfarm all along! Fetch me my Snare and our strongest catapult, we'll send them clear back to Space Camp!"

Really, nobody care for this one ?

At last, a code gate that the runner will really fear to facecheck — what Mausolus failed to be. The kind of card that is not a true gearcheck, but acts as one since the Runners will hate to trigger this thing, much like Architect. Ok, it doesn't install the card you'll search, but Midseason Replacements can't be installed.

Now, let's be clear, it's not the piece of ice to run 3 copies in a 4 code gate deck. Keep some Quandaries or Enigmas, for they are cheaper and true gearcheck. Keep some Mausoluses, they remain a higher tax on the long run and don't become waste if Yog.0 hits the table. It's not even a piece of ice that every deck should play. But still, it may become the default face check threat in many, especially the kill flavor ones.

(Station One era)
Lupus Yonderboi 236
It's great when you want it to fire, but it is missing the word "may" from the sub. The runner could exploit this to force you to keep drawing, and keep shuffling R&D for fresh accesses. — Goeshi 25 Mar 2017
If you like the ability to fire again (since the runner will usually avoid firing it) a Wormhole to it is a nice option. Also props to FFG for a little puzzle in the flavor text. — Silv 25 Mar 2017
The flavor text is hexadecimal for the guitar chords: Am G F G Am. These chords are repeated for Bob Dylan's "All Along the Watchtower." — CactusJack 27 Mar 2017
ICE tutoring with this comboes well with Bloom (Jinteki), Minelayer or Architect (both HB). Worth splashing? — Hongkong Koma 29 Mar 2017
(addendum) ...and grabbing some Grail ICE too. — Hongkong Koma 29 Mar 2017
I don't know where the idea that Mausolus is a code gate you are not afraid to facecheck comes from. Smashing face-first into it is hella annoying. — Gargulec 22 Jul 2017
Too expensive to splash, but a great card in Weyland. Best in IDs that need a particular card to work properly, like Titan or Jemison. It is too slow for Blue sun. — Severijn 28 Jul 2017