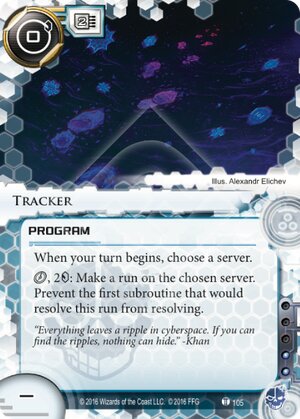 When your turn begins, choose a server.

click,2credit: Make a run on the chosen server. Prevent the first subroutine that would resolve this run from resolving.

"Everything leaves a ripple in cyberspace. If you can find the ripples, nothing can hide." -Khan
Illustrated by Alexandr Elichev
Decklists with this card

Once again, Criminals break new ground with clever ways to get past ice other than breaking it!

This is a card with a lot of interesting extremes. 0 install cost is great! 2 is painful. Preventing the first subroutine that would fire is awesome, but since it's "prevented from firing" instead of "Broken", you can't extend the effect with things like e3 Feedback Implants. It's really flexible, since it's "the first subroutine that would fire" - so you can break ice normally until you hit something you want to just ignore, and then let it take over, even if that's not the outermost ice on the server. And since it's a ability, you can't combo it with Criminal's powerful run events like Account Siphon or Inside Job.

It's clearly intended as a tool for early aggression. It's not technically an AI, but it fills a lot of the same niche, getting runners past single-sub ice without needing to have the correct breaker. It actually has a lot of overlap with Vamadeva, and is generally better for anything over strength 2. (Except for the memory cost, and the inability to use it with run events.)

All in all, I'm actually cautiously optimistic for this card. Şifr was the big news for this pack, but I think this card, sitting quietly in the background, will help enable an awful lot of criminal (and potentially other) nonsense.

(Quorum era)
Bwob 495
Nice review - but I think your math for the Mausolus example is wrong. Using Tracker costs 2, so while you technically pay only 6 for breaking, in the end you paid 8. — adquen 15 Jan 2017
Huh. Also much like an AI, it lets you avoid traps too. — LordRandomness 15 Jan 2017
It also works with "Street Magic" — Kitescreech 16 Jan 2017
@Adquen - oh right, excellent point! (I keep forgetting about the activation cost.) Updated! — Bwob 16 Jan 2017
@ Kitescreech - Dang, you're right! I hadn't even considered street magic, but that almost makes me want to try that out as a combo! Adding it to the review! — Bwob 16 Jan 2017
One really cool interaction is that this counters Marcus Batty — heppu 16 Feb 2017