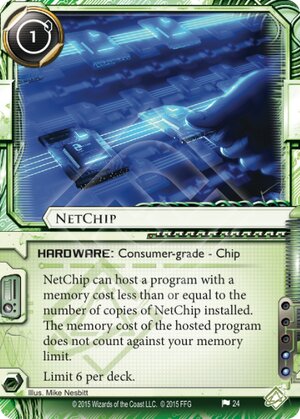 NetChip can host a program with a memory cost less than or equal to the number of copies of NetChip installed. The memory cost of the hosted program does not count against your memory limit.

Illustrated by Mike Nesbitt
Decklists with this card

Ho man. The second piece of consumer-grade hardware is here, and it's just as exciting as Ramujan-reliant 550 BMI was disappointing.

First thing, and this is VERY IMPORTANT: while NetChip lets you use a huge-ass rig full of massive programs, it does not technically give you extra memory. That means you can't throw down six NetChips and get a huge Sage or Overmind. You can host them on it but the actual empty MU has to come from somewhere else.

The next important thing to note is that while, in theory, you could hold 36 MU worth of programs on a full setup of six Net Chips, the largest two programs in the game right now (Endless Hunger and Hyperdriver) only cost 3 or 4 each. You're also never going to install more than one Endless Hunger at once, and Hyperdriver is a temporary program.

So really, your NetChips are going to be providing, at best, 2 MU each. That's pretty reasonable: a lot of useful programs cost two memory. For example: Magnum Opus, Keyhole, Garrote, Morning Star, Sneakdoor Beta, Sage. Many of these haven't seen much play because that 2 MU cost was just so expensive--and when's the last time you saw someone run Battering Ram or Collective Consciousness?

A realistic estimate for your NetChip usage is that even if you install all of them, you're only going to be able to host 9-10 MU worth of programs on them. Plus your starting 4MU, and 1 or 2 more from your console, and you're looking to be able to fit about 16 MU of programs into your rig.

So now you have to ask yourself two questions. The first question is: do I really need 16 MU? That's an obscene amount. Truly disgusting. Runners have developed to run lean and mean; before Maya, the Shaper console of choice was Astrolabe, because 5 MU was more than enough in most cases. Past a certain point, extra MU is just wasted space.

Because if you're not really using that much more, you have to ask the second question: should I just run Akamatsu Mem Chip instead? It's the same install cost, one less influence, and because you aren't hosting anything the order in which you play your programs doesn't matter. If you get three Akamatsu Mem Chip and a Maya installed, you have 9 MU, which is still pretty impressive.

But if you're of the opinion that bigger is always better, give NetChip a try. You won't be disappointed.

(Business First era)
tiedyedvortex 4656
Well i guess the professor just found his way of HOSTING every program in netrunner. Personal workshop to pay for installs netchip to host. I AM ZE UBER RIG!! — gamblingworld 11 Mar 2016
@gamblingworld that's true! this could be a great card with the professor! Well better go try it out :P — inonetrun 13 Mar 2016
I like the idea of Replicating my deck down by 6 cards quickly. Talk about running lean and building a fast rig! — bourgman 22 May 2016