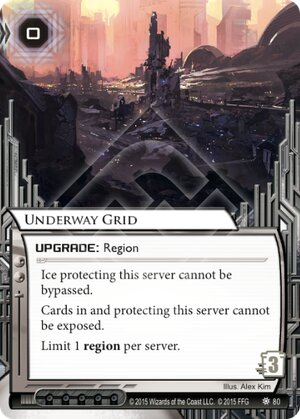 Cards in and protecting this server cannot be exposed.

Illustrated by Alex Kim
Decklists with this card

This card is extremely cheap (1 click to install, 0 credits to rez) and it prevents entirely 2 uncommon categories of runner behavior, exposing and bypassing. In any given game, this card will tend to be either amazing or useless.

Against Shaper or Anarch this is usually a dead card. On the other hand against Criminal it interferes with Femme Fatale Drive By and most importantly Inside Job. A quick glance down the "popular" page shows no criminal decks that don't have 1 or more of those (typically 2 Inside Jobs, 1 Drive By), except for one which is a Silhouette: Stealth Operative deck, who obviously doesn't love this card.

So, a card that is useless roughly 2/3 of the time (figure people export bypassers or exposers from criminal about as often as criminal players decide to forgo their signature events.), but is very useful indeed when it works. Is it worth slotting one? I guess that depends on how well your deck is doing vs. criminals, and whether or not you can make use of a card that is basically a blank asset vs. non criminals. I suspect most decks will give this card a pass. Decks that make heavy use of ambushes may consider it, as well as decks that include brutal sentry ice that they don't want anyone to bypass.

One factor that will soon argue in this card's favor, however, is Sunny's Security Nexus which can be disarmed by this card. If Sunny ends up being a popular identity, or the Nexus is simply good enough to be farmed to other identities out this card's stock will rise.

(The Universe of Tomorrow era)
Waltzard 375
It also negates Femme Fatale's ability on that server, which is used fairly often in shaper. — EnderA 21 Oct 2015
Mushin No Shin into Underway Grid on a new server is pretty fun. They can't expose (or Drive By) your gambit. — pbrand 27 Jun 2016