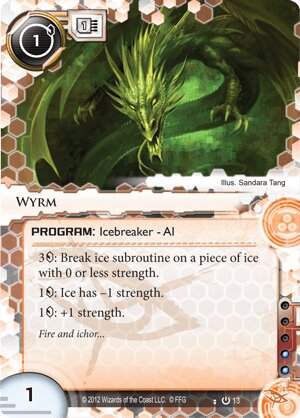 Interface → 3credit: Break 1 subroutine on a piece of ice with 0 or less strength.

Interface → 1credit: The ice you are encountering gets -1 strength for the remainder of this encounter.

Fire and ichor…
Illustrated by Sandara Tang
Decklists with this card

Legends speak of a dragon that lived in the early net. Like all dragons, this one seemed fierce, deadly and without mercy. But this was not true. Behind her ferocious exterior was in fact a pained heart, for although she seemed to be the terrifying incarnation of death itself, all she really wanted was to care and nurture. She wanted to feed and nourish her many children, and give them strength when they were too weak to have it themselves. So strong was this wish that after years of anguished internet swimming, she roared her desperate plea into the void - and something answered. What answered? Not sure. But whatever 'It' was came forth and offered her a deal:

"Ah, Wyrm..." It said, "Is Wyrm ok?...Not too informal? Ok, good. Found it's always polite to ask. Anyway, you want to make some little green serpents of your own, right? Well, I can't make them for you, but it just so happens there is a little clutch of green squigglies just waiting for the care of someone like you. See, they love ICE. Big ICE, small ICE, puzzling ICE, nasty ICE; all kinds really, they're not fussy. Now, the little ones they can handle by themselves no problem, but the big ones...Oh, the big ones. You've seen them haven't you, in the distance? Such majestic, terrifying (probably delicious) creations they are. How your little squirmypoos would love to chew on a Golden Ring or Giant Wallbird, but too often they just respond with their high strength by going,

"DONG!" or "Caw! F*ck off." and they can never reach it before some evil human purges the little critters back to being helpless. So sad ='( They'll never get them by themselves, but you...With your amazing ability to extend and retract (for 1 a time), you can go up to the big ICE, grab it by the throat (or whatever a golden ring has), and bring it back down to your little babies, so they can eat it instantly. Imagine the possibilities if you carved out a little place to call home as well (eh?) They'll never go hungry again! If that is your wish..."

And so delighted at this prospect was the excited Wyrm, that she said yes(!) immediately, and It granted her wish before dissapearing with an ominous chuckle. And for a time she was happy. But then, after all the time spent feeding her little babies, and as she started to feel a little peckish herself, she realise she had been tricked. For although she could feed others to her heart's content, she could now never eat for herself unless, that is, she spent 3 per subroutine, and let's face it, even she knows that's never going to happen.

Translator's Notes: Other versions of this story also mentioned Wyrm mingling with a Datasucker in their carved out chambers for added potency, but that's another, far more explicit story; not for the faint hearted or easily flustered.

Ignore the first ability. If you're using Wyrm to break subroutines, you're doing it wrong. That leaves the ability to raise Wyrm's strength and lower the strength of currently encountered ICE and that's the real reason to use Wyrm.

Combined with Mimic and Yog.0 (and possibly Morning Star), you can use Wyrm to adjust the strength of ICE to a point where static ICEbreakers can break subroutines economically. Used like this, it's not terribly inefficient to get past stronger ICE compared to other ICEbreakers.

Perhaps the best use of Wyrm though, is in combination with Parasite. Sure, you need to pay to raise the strength of Wyrm up to match the ICE's strength and then pay to bring it all the way back down to 0 but you don't need to break any subroutines and you only have to do this once because the Parasite will immediately trash the ICE.

(Order and Chaos era)
yithian 178
As with most wyrms, Personally Touching it really helps it spring to life. — wily-odysseus 13 Feb 2015
The subroutine breaker is still good against traps, which generally have low strength and can ONLY be broken by AIs. A side benefit to using Wyrm is the ability to break those (albeit at significant cost) in a deck that might otherwise not be running an AI at all. Additionally, Atman is another fixed-strength breaker for it to interact with (although it costs 5 credits to bring a 5-strength ICE in range of 4tman...) — LordRandomness 11 Jan 2016
So to break a stength 6 sentry, you up strength 5 times, lower sentry's strength 2 times, and use mimic... tell me why didn't I just use Femme Fatale? — Personal Snare Iris 26 Sep 2019
3

Oh, Wyrm. Easily one of the worst AI breakers around. While very cheap to install, actually using it will drain your credits quickly. 3 to break 1 subroutine, and that is if the ice is at zero strength! Only with Datasucker, Ice Carver, and a prayer is this card even remotely useful.

To beat something as basic as an Eli 1.0, this will cost you 6 for subroutines, not to mention reducing its power by 4. 10 later, you beat it. e3 Feedback Implants are an absolute must with this.

Don't let the cool dragon fool you, this is weaker than almost any alternative out there. Just use Crypsis, Overmind, or a Parasite.

(Order and Chaos era)
Steamwood 298
That this card breaks any subroutines at all is largely an afterthought. This card is designed to be a support piece which lowers ice strength, to allow some other effects to fire. — shatner 12 Feb 2015
Also slight correction on the math. It in fact costs 13 credits to break Eli, not 10. 3 to pump Wyrm, 4 to debuff Eli, then 6 to break. Shatner's right, though. The only reason Wyrm even can break subroutines is the off chance you drew poorly and have to get into a server before your Parasite or Darwin is ready. — Feasul 12 Feb 2015
Oh whoops, you have to boost Wyrm's strength in addition to weakening Eli? Man, this is even worse. — Steamwood 13 Feb 2015
Wyrm's great at polishing off something reeling under parasite and data sucker drain. — KitsuAeryn 14 Mar 2015
1

I've always considered this as a paid ability for the Datasucker token utility. When Datasuckers are used in a rig that only uses tokens and fixed breakers, then there is usually that moment in the game where the corp can put a tax on all the centrals and map out a scoring window by purging the tokens. I think this card was originally made to give Anarchs a way to continue using their fixed breakers after being shut out of centrals with taxing ICE.

Unless you are using cards that give runs multiple benefits such as Desperado, Security Testing, John Masonori, etc.. I think Wyrm can still provide some advantages over datasucker with the right economic engine. There have been several times I just dug into archives 2-4 times a turn for the tokens. It would be much more efficient to simply grab some money off of Armitage Codebusting or better yet Liberated Accounts and cut that ice down into the range of the Yog.0s and Mimics. Even clicking for a credit is a safer bet when your runs are accomplishing nothing else. I think any Anarch using the classic DS/fixed suite should throw at least 1 of these guys in here for that late game shutout, and out of faction that relies heavily on the Datasuckers should give the card a moment of consideration for that crucial burst of speed.

Something I would like to know is how well this card could work with other breakers that are expensive to bump their strength. Instead of spending 2 credits to increase a card like Femme, you could just chop the ice down to size a bit and get through much cheaper than you would have otherwise. It could possibly balance out the price of using Ninja, or even some stealth breakers that you would have had to originally pay another stealth token to increase the strength enough. I have not had the chance to test these yet, so input would be appreciated,

I wouldn't consider this a tier 1 card, and would be shocked to see it top level competition. But I think this card is being overlooked for some of the overall utility that it provides.

@Feasul when pricing something to break an Eli, you gotta factor in the ability to click through it. Depending on your econ it could just be better to go through if it would cost you more than 4-6c to break if you are really needing to get through. I will note its a highly inefficient breaker, but if you compare it to a Crypsis that would pay the same amount to balance the strength of ICE to breaker, then a click per subroutine, Its valuing the cost of that click to 2c. The choice then again comes down of your ability to make that 2c when it counts.

(Breaker Bay era)
mcchikinfrenzy 3
Breaking a 4 strength ice by lowering to Femme's strength with Wyrm is actually more expensive. — dijidori 23 May 2015
Your comment about Femme makes me think you might've overlooked the fact that Wyrm needs to be boosted up to the same strength as the ice to be able to lower said ice's strength. Which would mean your whole review is misguided... Just checking! — Flipmaester 26 May 2015
1

I' just waiting for some Johnny player to make a fun Wyrm / Parasite / Scrubbed / Ice Carver / Datasucker deck. It would be a kind of pseudo Eater & its cutlery deck. e3 Feedback Implants might be helpful, but I believe these kinds of decks are best when they focus on doing one specific crazy thing with all its cards. Or... could it be possible to just mix Eater AND Wyrm? Absolute destruction!

(Order and Chaos era)
benticurus 1707
I have one Wyrm in my Noise Hivemind deck between Datasuckers and Wyrm, it's reasonably likely you can get a piece of ice to the range that you can blow it up with Parasite. Effectively, you're paying 2c per strength to bring Ice in range of Parasite, or better breakers. — Wookiee 13 Feb 2015
I use one wyrm in a similar deck for the same reason. it often makes the difference between burning down the breaker and bouncing off it — KitsuAeryn 14 Mar 2015
I had a 3x Wyrm/3x Parasite Chaos Theory deck, using her small deck size and all that shaper draw and recursion. Just personal touched Wyrm and blew r&d open lategame. — Riconosuave 24 May 2015
I had moderate success at a tourney with Wyrm+Parasite CT: http://netrunnerdb.com/en/deck/view/101351 — rnark 25 May 2015
So fun :) — rnark 25 May 2015
@rnark I've been working on a variation of your deck, but haven't gotten to really test it yet. Love the concept. — NerdimusPrime 27 May 2015

I want to see a Wyrmosaurus one day :) maybe I can try it in a random Noise deck...

The biggest advantage of Wyrm is being a cheap AI. It can be used to pass early Chimera /Quandary/Ice Wall, if the Corp choose to rush an agenda or secures an HQ from fast Siphoning. It works wonders in early game. After the first two - three turns it can perform some fancy combos with Atman and Parasite (quite spectacular in some cases), but mostly that's it. Oh, and it can pull your sorry ass out of troublesome traps too.

After that, Aesop would happily pet it ;)