Play only if the Runner made a run during his or her last turn. 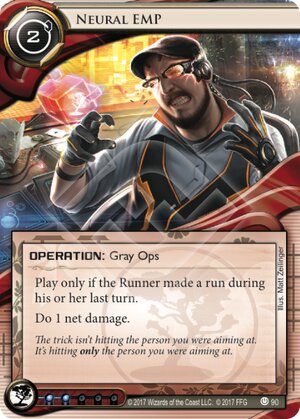 (Breaker Bay era)
lynkfox 360
don't forget how I've had worse bullies it around. — cmcadvanced 4 May 2015
Certainly does, making it harder to flatline using it. However, once Selective Mind-Mapping hits, IHW getting hit by this would be a thing of the past. Use these to hit all the cards around IHW then ronin for the finish... — lynkfox 5 May 2015