Aggressive Secretary can be advanced. 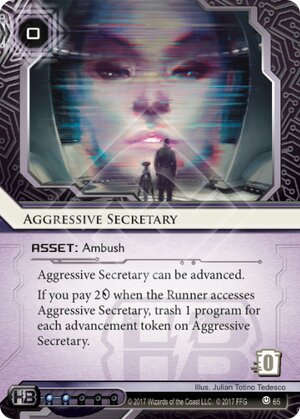 Jinteki may have been the trap king of the core set box, but Aggressive Secretary has still been a useful card for many decks. It may not be as scary as it’s brain damage cousin, Cerebral Overwriter, but it is perhaps a little more powerful. Trashing installed programs without ICE is a rare effect, one the runner has little way to protect themselves from. Destroyer ICE, that is ICE with the Destroyer keyword that most often has a trash program subroutine, are almost always Sentries. While a few exceptions exist, it is very safe for a runner to find their sentry breaker if they are worried about losing an important program, or put down a Sharpshooter to protect themselves.

Aggressive Secretary takes that protection away. Only Sacrificial Construct can give a shield sort of effect, and only once. AggSec is very often placed to open up a scoring window. Not only does the runner have to run it - possibly through layers of ice they paid to get through, but losing a key breaker can keep them out. With a fracter gone from the table, those end the run barrier ice are suddenly much more imposing again. Even if it is only for a turn or two until the runner can get a fracter back out, it is still a window to score. As one of the few advanceable traps, it is well used even without the program destruction, even if it just is for causing the runner to use up their credits to get in.

Still, it is not that easy. Shaper in particular, but imported to other runners, have a large amount of recursion in their decks. Bringing programs back from the heap is very easy to do, and often can be done on the fly. There is no scoring window if the runner just uses a Clone Chip to bring their icebreaker back.

There is a bit of a light for AggSec however. Cards like Scheherazade, Leprechaun, and other Daemons are a great target for AggSec, usually destroying two or three programs at the same time and leaving the runner without a vital piece of their rig. Programs always need to be trashed, if just to set the runner back a few clicks, and AggSec will always be an option for that.

(The Valley era)
lynkfox 357
Once Blacklist works its way into decks those these two cards will become best of friends; a program gets trashed and can't be pulled back - causes a lot of problems for shapers running 1 offs. — Cliquil 22 Apr 2015