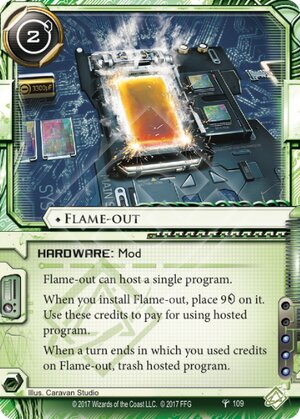 Flame-out can host a single program.

When you install Flame-out, place 9credit on it. Use these credits to pay for using hosted program.

When a turn ends in which you used credits on Flame-out, trash hosted program.

Illustrated by Caravan Studio
Decklists with this card

It's a crime that this card doesn't yet have a review by somebody better at this game than me, so I will do my best.

First of all, this is a good card. Probably one of the best cards to host on this is Self-modifying Code. Use the credits on Flame-out to pay the 2 that it costs to activate it. Probably won't be a good idea to host what you find on this, unless it is something like a Sharpshooter which you intend to use once and trash anyway, though.

My read says you can SMC to drop Ika on this and then pump Ika with the Flame Out money and then use Flame Out money to pay the "host on ice" cost of Ika and then Ika probably won't be trashed because it is no longer hosted on Flame Out. Flame Out says it trashes "the hosted card". Maybe that's a question for the rules team, though.

Also, Modded is a really good card, and this is a not quite optimal but still pretty good target for it.

Kabonesa Wu: Netspace Thrillseeker is a decent ID to try to use this card with. She is in faction and she has an ability to spend a click and search your deck for an SMC and put it in play. That's a great way to make sure you can find your breakers early and it's a great way to spend Flame Out money.

Also, she can drop SMC on Flame Out to find Rezeki if it's money you want.

Good card for both Kabonesa Wu and Flame Out is Rejig so think about using that if you are going that route. Rejig will let you spend the money on Flame Out and then move the card off Flame Out before it gets trashed. Test Run will do a similar thing and let you use the Flame Out money while keeping your breaker from being trashed.

Some out of faction cards to consider with this are Khan: Savvy Skiptracer breakers like Golden/Peregrine/Saker, which allow you to pay an extra amount after you pass an ice to derez it and then take the breaker back to your hand so it doesn't get trashed. Chameleon is another good try which is in faction for Shaper.

Aesop's Pawnshop will let you sell the Flame Out for extra money after you spend the 9, so consider adding that card to your deck too. There is also some synergy with Flame Out and Spec Work so you can at least trash the program for a benefit after you used the Flame Out money on something.

You might also try using Trade-In to trash one Flame Out after you spent the money and then get another one from the deck to get a new set of 9 credits. You can also just use that opportunity to get some other hardware that you need instead of another Flame Out like an Aniccam, a Cyberdelia, or a R&D Interface.

I don't suggest using Independent Thinking in Adam, but if you do use that card, then you may get extra mileage out of Flame Out that way. You could trash one of your directives, the Flame Out, and whatever is hosted on Flame Out that is about to be trashed, and then draw 6.

Also, FWIW, flavor wise I have to believe that Flame Out is Kabonesa Wu's card, like she is the one that invented this hardware and uses it. Flaming out is exactly the kind of thing that it sounds like a Netspace Thrillseeker would do. The way that Flame Out works seems to fit perfectly with the way Kabonesa Wu works as well.

That's all I can think of, so hopefully the above sparks some ideas.

On Ika, could you even boost the strength before moving it to the ICE?

Flame-out combo very well with Mayfly, since Mayfly would be trashed anyway.

Would you mind explaining how the Pawnshop generates money after spending the creds on Flame-Out? As i read it, Flame Out will be destroyed at the end of the turn, while Pawnshop requires the start of the turn. Am i missing something?

Nevermind, i need to read more carefully. sorry for bothering.

@Jtfq99999 I think yes, because it´s a paid ability without any tags like interface, so if you pay the cost you can activate it, but then there´s the question: How long the strenght will last? It depends on the moment when the icebreaker´s strenght returns to it´s basic strenght, because if this happens when the encounter ends, then you´ll be able to boost Ika by money from Flame-out and then use the interface ability to break ice, else the strenght will return to the basic strenght before you get to the paid ability window for breaking ice and you will have to pay for the strenght from your credits