Draw 1 card for each installed clan resource. Gain 1credit for each tag you have. 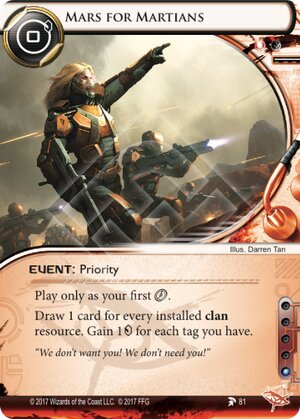 A 0 1 event that lets you get potentially a lot of credits and lets you draw some cards to boot is always interesting, to say the least.

Obviously there has to be a downside. That downside is that tags are generally considered to be bad for you (BOOM!, The All-Seeing I, Psychographics, etc). It takes a special kind of deck and a special kind of player to put up a big neon sign saying "I'm here, come and get me" and survive, nay win even. And yet that's exactly what the Mars clans like to do,

Let's take a look at the thematic support cast (from the perspective of Free Mars):

Another useful card is Data Leak Reversal. In particular DLR can be used to waste clicks on making the corp bleed cards, frustrating their game plan while you gain tags for a big run.

Of course there are other tricks as well that I can't think of right now (note: I'm skipping the soon-to-rotate cards on purpose). Be sure to read the comments.

Overall Mars for Martians is a VERY powerful card if you're going tag-me. Obviously it's a pretty useless card if you don't.

(Free Mars era)
Silv 307
Another anarch card that thrives on tags is Obelus. It also has a little synergy with Clan Vengeance (hand size helps you survive damage) and Counter Surveillance (turning the multi access into a draw engine). Although it's not from the mars-themed cycle ;) — Krams 27 Jul 2017