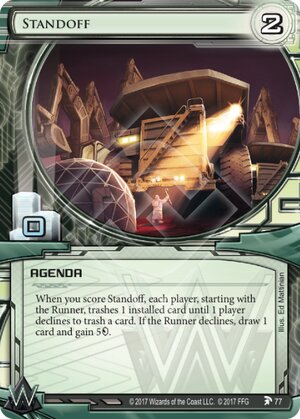 When you score Standoff, each player, starting with the Runner, trashes 1 of his or her installed cards until 1 player declines to trash a card. If the Runner declines, draw 1 card and gain 5credit.

The official FAQ now states that Standoff only allows players to trash their own cards (FAQ 4.1). So suddenly this agenda becomes much less about kicking down each other's sandcastles until someone chickens out, and more about how much the runner doesn't want you to gain a Green Level Clearance.

The runner probably doesn't care too much if you gain a Green Level Clearance.

This agenda is now a lot more like Hostile Takeover in that it gives you a reimbursement for spending an entire turn scoring it, except it doesn't get you points and if the runner has dead cards installed you'll have to fight for it.

It's still good forfeiting fodder, or Hunter Seeker fuel, but it's lost a fair amount of interest otherwise.

(Crimson Dust era)
Am 68
Thank god, they hose the ruling that makes sense! — Krams 17 Oct 2017
Can we delete the UFAQ ruling? It is out of date and confusing because it directly contradicts the current errata. — SillySod 20 Jan 2018
5

Okay this is a really weird agenda, but I like it. As per the UFAQ, both players now have the ability to trash each other's cards. This agenda went from a staring contest into "Let's kick each other in the nuts until one of us gives up". Now the standard play would probably fall into one of four categories.

3 of these scenarios are generally favorable to you. You get a GLC and Archer/Tithonium fodder. Great! Unfortunately you probably lost a piece of ICE in the process. Bummer. Now I think that's what differentiates this from Hostile Takeover. This is a Mid Game card. In the middle stages of the game, both players have their board states more or less assembled, but the runner is still missing a critical piece from going into the late game domination phase. During this part of the game, the runner will must likely hesitate. Do they trash your ICE? What if they lose that breaker they tutored for last turn? This card leaves the runner a choice. A hard choice, something Weyland has been getting good at lately. Overall I think this is an interesting agenda, and an almost autoinclude for any Weyland player who wants to rez Archer. One tactic is to neveradvance this with a Midseason Replacements or Hard-Hitting News threat. Then they have 0 points and 17 tags! yay! And if they leave it alone, you can replace whatever ICE thry destroy when you score it and kill one of their cards!

EDIT: Another noteworthy combo is that the downside can be mitigated with a few well placed Warroid Trackers

(Blood and Water era)
Handsome Jack 1589
The underlying issue with Standoff is that if you are using it with ice like Archer, then the runner being able to trash a rezzed archer off of you scoring this really sucks, though if the runner has no way to protect their icebreakers, then that will be a problem for them anyway. — Quarg 23 Jun 2017
Standoff's main effect is getting 0-point agenda to fuel some storng Weyland cards. — WildSam 24 Jun 2017
Economic benefit of scoring it is literally same as drawing any other card, keeping it and clicking for credits thrice. Trashing is Runner's choice so all your fancy rigshooting variants just not goint to happen - you will just get those 3 clicks for money. Even worse, until there is official errata Standoff threatens to punch you. But later it will be a strong option to get agenda-hungry cards online or to start Jemison FA. — WildSam 24 Jun 2017
So the best bit is that from this ruling - Endless hunger and Heartbeat got an awesome boost in power - I can now trash corp cards to break subroutines and prevent damage. Both sets state "Trash an installed card" - better get that ruling changed quickly... — Raga 25 Jun 2017
Raga, you are incorrectf on how this ruling relates to Heartbeat and Endless Hunger. Both Endless Hunger and Heartbeat require card trashes as a cost; you cannot pay costs by trashing your opponents cards any more than you can use corp credits to pay for using an icebreaker. Standoff trashes as an effect, which is different than a cost and can target most installed cards. — bubbathegoat 26 Jun 2017
Bubba - that makes much more sense...for a minute there I thought they might have just made a stupid ruling up for the sake of it instead of just making this card useless... Was a kinda pointless card then, is even worse now. Shame really, finally thought Weyland were getting some cards that they might want to run.. — Raga 26 Jun 2017
Much as Project Kusanagi is good in PE, this card will be good in Argus Security. Of course, Aaron being in most decks makes Argus Security very hard to play. — quailman2101 29 Jun 2017
This also turns on more chances to play hunter seeker or midseasons (whilst we still have that) which can't be a bad thing. — Oooer 10 Jul 2017
Right so to be clear, is anyone actually going to play with this obviously mistaken ruling? I mean I guess if you've got that one dude at the local playgroup who hates eye contact and INSISTS on it. But it is clear to everyone that Boggs maybe just got to this at the end of a long night right before he went to bed and it will be changed later. Right? — syntaxbad 5 Aug 2017
2

4.1 made this a less insane mind game, but it's still good fun and an easy way to get agenda fodder.

What I really made this review about: Can we all agree that the little martian Arthur Dent in the art is adorable?