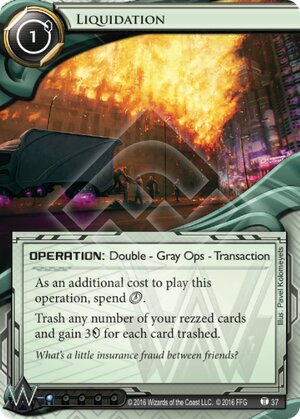 Trash any number of your rezzed cards and gain 3credit for each card trashed.

Haven't done a review yet, decided that this should be it.

Let me start with, this is a terrible card most of the time. It takes clicks to install things, sometimes credits to rez them. This card throws out all those clicks and creds, and gives you credits on hand. What this card actually is, is a stance change. You destroy everything that you've built for liquid capital, hoping that you've got enough cash to win with whatever your strategy is.

This card might be a counter to some runner techniques. IE - if they just installed Yog, this would let you recoup some of your credits for ICE that just became unusable. Or if the runner keeps bouncing off outermost ETR ice to build counters on Turning Wheel, you could sell the ICE.

The only other place I could see this card being useful, is in an asset\ICE spammy deck, with a kill package. The theory would be to build board state to a certain point, then pivot. You spend early game building board state. Sometime in midgame, play this card to remove unused\unusable assets. Then, play something like Midseasons to tag for a bajillion.

It may also be useful for some kind of CI7 combo, and Accelerated Diagnostics.

(Escalation era)
wookiez 111
I used Liquidation to get mass credits for a guaranteed Punitive Kill. It does work, but it's a 'burn everything down for money' and win that turn. — Mechanoise 25 Oct 2016
You can also play it into Midseason to effectively convert your cards into three tags each. It's a nice backup plan if they break into your remote in a way that makes it obvious you're not going to be able to lock them out well enough for it to count...just burn the whole thing down for tags! — LordRandomness 25 Oct 2016
So, now that Friends in High Places is out, this card becomes slightly better. Trash 2 rezzed cards, gain 6 credits, play FiHP, reinstall 2 of those 3 trashed cards. Net total is 3 credits. Not great, but now the runner has to chase those cards are you do it again. Coupled with Bryan Stinson, and it's 0 credits 1 click to replay - slightly better. — CactusJack 5 Apr 2017