Play only if the Runner made an unsuccessful run during his or her last turn.

Success is defined by the safety of data, not the safety of potential intruders.
Haas-Bioroid • Irys Ching • Creation and Control 14
All sets:
Links: Decklists | ANCUR 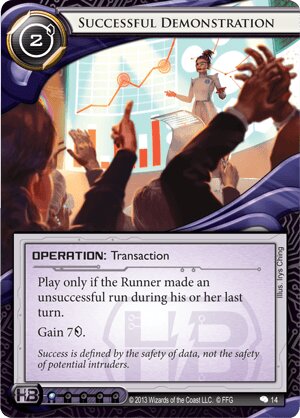 I love this card. I think it's great. It boggles my mind that it doesn't see much play.

Look. Compare this to Restructure. Both cards give you a net gain of 5 credits. Only Restructure will fail you in those moments where you need it most. You will draw it with 2 credits in the bank and it will leave you in the stupid position of having to decide whether it's worth it clicking for credits the next 4 turns or keep drawing for cards for a Hedge Fund so you can afford playing Restructure.

Or consider how you might get to 8 credits when suddenly the runner Indexes R&D. You could rez a Tollbooth but it would put you in such a financial hole, you won't be able to afford the Restructure. Not next turn and probably not for a lot of turns down the line. Most of us will let that Indexing through to have a chance to keep rezing thing late game.

Here is where Successful Demonstration comes in. It is good for the same reasons Desperado is good: It rewards you for doing what you want to do anyway - stopping runners. It says - "Go ahead, rez that Tollbooth" It says - "Go ahead, put 5 credits into that Caduceus trace".

Yes, it's probably less great if you are going for some kind of Midseasons or Scorched Earth win, where you kinda want runners to do successful runs. Although with Weyland BABW, you would get 6 credits instead of 5 since this is a Transaction.

And as the cherry on top, there is the psychological aspect - when the runner crushingly realizes they really should have clicked through that Eli as you play 2 Successful Demonstrations gaining a whopping 10 credits with a grin on your face from here to midway station.

Make no mistakes. This is an EXCELLENT card. It is very playable and it is a ton of fun.

(Up and Over era)
krystman 2702
I've been playing this lately in my NEXT/Foundry deck and am totally in love! A 5 credit swing from 2 is monstrous. The absolute silliest it got was against that CT Au Revoir nonsense, which gave me the chance to use it every single turn if I had one ready. I had happened to score an early Hades Fragment, so they cycled back in immediately and basically gave me unlimited cash. It can be shut down pretty hard if the runner knows you have them and denies you unsuccessful runs. Also funny anti-synergy with Crisium Grid. — wily-odysseus 14 May 2015
I agree, I absolutely love this card in glacier decks. It's wonderful to be able to bounce back so well after rezzing something big, and laughing at the runner. I love the flavor of this card so much as well. I imagine Haas is just showing the runner splatting into a Janus on loop, and asking if there will be anymore inane questions about their security. — Clutchpedal 21 May 2015
The big problem with this card is that it only works as long as you're rezzing ICE, and the runner is rigging up. Late game, unsuccessful runs are fairly uncommon outside of Caprice. However, that's not a big enough reason to avoid playing this card. — Glitch29 16 Jun 2015
It's more a reason to add this card whenever you're adding Caprice :D — Krams 21 Oct 2015
I always play this in Weyland BABW, it never disappoints. Credits for days! — Mechanoise 8 Jan 2016