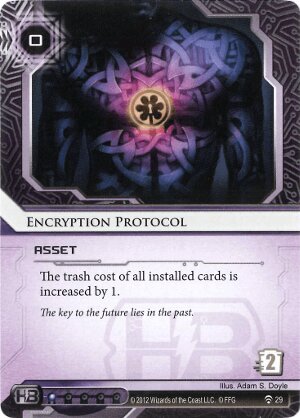 The trash cost of all installed cards is increased by 1.

The key to the future lies in the past.
Illustrated by Adam S. Doyle
Links: Decklists | ANCUR

Of the many cards we are losing in rotation that will be forgotten instantly, I must say, this is the one I expect that I will still sometimes reach for and catch myself.

It's a simple card. Often the first to go when cutting for deck space. Clunky at times. But in these Temüjin Contract days when the runner has more money than they can really spend, every credit helps.

It has been a fun splash in Gagarin Deep Space where even one of them means that getting rid of it costs and 4. And it does this while adding one more sub to Tour Guide. I've tried it faction before with Oaktown Grid and it has made getting rid of IT Departments abusive while they make getting past stupid cards like Rototurret abusive. I've loved tossing it with Hostile Infrastructure in asset heavy Jinteki to make it everything too expensive to trash in one more way.

None of these are top-tier uses, because this isn't a top tier card. Oaktown will still be around as will all the cards I've linked here. (Ash is going away too which is why he gets no call-out today. Same with the extra costs from Strongbox.) But even as all of these tricks still work and honestly still work as well as they do without this card, I thought it best to write it a quick love letter and see if I can get anyone else to pull it out from their binders one last time before it gets a permanent spot in the cycle pile.

While I agree with the previous review's premise that this is an economic warfare card, I'm not certain it absolutely requires a horizontal playstyle to be effective. It certainly helps protect your PAD Campaigns and Adonis Campaigns and the like, but where it really shines is protecting cards you might otherwise consider one-shot agenda protectors. Getting a couple of these down can quickly make your scoring server's Ash 2X3ZB9CY and/or Red Herrings nigh untrashable -- if you're running either (or both!) of those cards out of HB, I'd strongly urge you to at least give it a try. The difference 1, 2, or 3 credits makes to the trash cost is incredible.

(Chrome City era)
KitsuAeryn 293
I really like this card for all of my decks that A) use a lot of assets/upgrades and B) try to get an econ advantage over the runner. Put this behind something simple like a Pop-Up for more tax; meanwhile a Tollbooth guards a Caprise/Ash and NAPD in the scoring server. — PureFlight 30 Dec 2015
1

Encryption Protocol is a simple, yet effective card, a card which primarily is used to drain the runner of credits. It certainly can, after a certain point of critical mass of trashable, installed, assets, protect them in a way, it is really not meant for that purpose. It is first and foremost, a card of economic warfare. Forcing the runner to pay a few extra credits to trash assets can make or break a runner’s economy. Forcing them to spend another click and at least three more credits to trash even just one Encryption Protocol can be worth it as well.

It shines best in horizontal style decks of course, where the runner may not spend all the time needed to run every server created. It has a special sort of annoyance when used with trap cards that usually have a 0 trash cost, forcing the runner to pay to remove that deadly trap, so they don’t have to recall that was what was in that server.

Still, it only has seen some use as there are usually other cards that can advance that economic denial strategy a little better, or it is simply more beneficial to include other high trash cost assets instead of this one, assets that also advance other strategies the corp may be pursuing.

(Chrome City era)
lynkfox 362
Trashing installed traps is generally poor play. If you trash it, it can be easily jacksoned back into R&D, so you're more likely to see it again later. Yes, the corp just has to install over that card to trash it and jackson it back in, but that's still more effort that you putting it in archives for them; in particular, if there's 4 or 5 traps on the field, installing over all of them isn't practical, so trashing them is just shooting yourself in the foot, really. — ouroborosglyx 30 Jun 2015