Choose a piece of ice. That ice gains sentry, code gate, and barrier until the end of the turn.

"There's that moment, you know, when the whole world seems to fall away and it is only you and your mod, and the mod is the world."
Shaper • Christina Davis • Core Set 37
All sets:
Links: Decklists | ANCUR 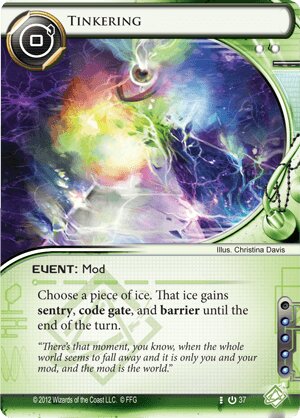 Tinkering is a very niche card that has had some use out of decks using Rielle "Kit" Peddler: Transhuman or maybe Quetzal: Free Spirit(Though the influence would be very tight then) to get more out of their base abilities. Paintbrush Kit it hasn’t really seen a lot of use, which maybe should be thought about in a different light.

The big thing that is often overlooked on Tinkering is that it does not have to be on a rezzed piece of ICE. Any ICE can be targeted with Tinkering, even unrezzed pieces, giving the runner quite an opportunity. It becomes a Shaper version of Inside Job, when the runner only has a single breaker out. Certainly no where near as effective, and without knowing what the ICE is trying to calculate the cost of the run is very difficult, but there are ways around those issues.

Though it has not seen a lot of play, it is certainly a card worth re-looking at and considering again in a different light. If seen early enough it can help get into servers the corp thought were safe, and even late game it can allow more efficient breakers to work on ICE that is costly to get through for another type.

(Breaker Bay era)
lynkfox 357
Agreed, this card is underplayed. It's fantastic early game to bust into a server that the Corp thought was safe. Even lategame it can be an econ card - eg to make an expensive sentry ice into a code gate for Study Guide, Refractor or Gordian Blade to breeze through. — Ber 11 May 2015
It can also be a sneaky way to break an abnormal ice, like a Trap or a Mythic, that otherwise might not be breakable with a traditional breaker suite--say, to get 2+ runs on a turn despite an Excalibur, to avoid a Universal Connectivity Fee, or to break a Mother Goddess with no other rezzed ice. — Comfect 11 May 2015
Also a fairly good splash for decks running surfer — geekywhale 21 Oct 2015
The other big thing that's often overlooked is that it says until the end of the TURN, so you can potentially hit a central three times through the tinkered ICE. Not to mention that if you're using Snowball as your Fracter and the corp put something in front of a piece of natural Barrier ICE... — LordRandomness 2 Jun 2016