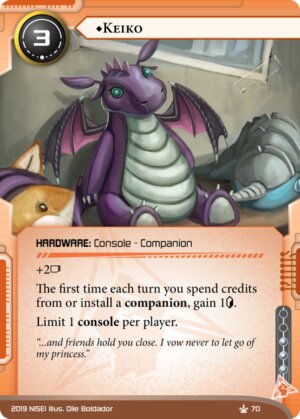 The first time each turn you spend credits from or install a companion, gain 1credit.

"...and friends hold you close. I vow never to let go of my princess."
Illustrated by Olie Boldador
Decklists with this card

IMO, this is a prime example of a well-designed card that doesn't cost nearly enough and therefore ends up being a bit too powerful.

3 credits for a 2 MU console is amazing value at the worst of times. Except this only costs 2 credits, because Keiko triggers itself on install. No other card in the game gives you two unconditional MU for such a low price. Compare to CyberSolutions Mem Chip.

But, I hear you say, that isn't comparable. Keiko takes up a console slot. Fair. So let's take a look at the ability. A 1 credit drip every time you install or "use" a companion. Easy enough to reliably trigger every turn. There are several companions out already, most considered pretty strong.

A one credit drip isn't super broken, but in combination with a 2-MU console which costs two to install, I think it is slightly above the curve. Anarchs who like to be filthy rich and need MU for programs like Stargate will definitely consider this. Especially considering the lack of tempo loss compared to a card like Maw. Maybe Keiko should have kept its cost and been 1 MU instead? I don't know. I just know this feels a bit wrong to me.

I agree. I am not sure if it does refund a credit, may need a ruling on that, but even at 3 it's a push. Compare it to Paragon. 3 cost. Keiko has one more MU. Both have a way to make a buck each turn, but Keiko doesn't involve interacting with the corp. Just free money. Paragon may offer the deck peek as a bonus, but really, that's nothing compared to an MU, in terms of general power.

I can see the Smoke over the horizon already, lol.

It has been confirmed by Nisei on Facebook it triggers itself.

Did NISEI think that Keiko would force you to too much into a pre-defined companions template? There's just so few downsides to the console. Supporters of this card's power level are far and few. I wouldn't be shocked to see this end up as Removed soon.