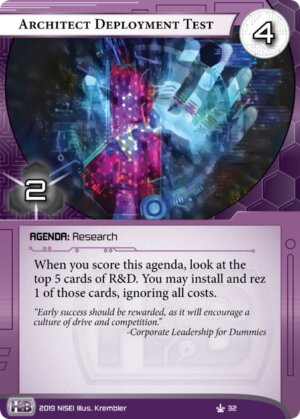 When you score this agenda, look at the top 5 cards of R&D. You may install and rez 1 of those cards, ignoring all costs.

"Early success should be rewarded, as it will encourage a culture of drive and competition."
-Corporate Leadership for Dummies
Illustrated by Krembler
Decklists with this card

Similar to Accelerated Beta Test except more versatile since it can install non-ice cards, and MUCH safer since it doesn't discard any agendas. Also has the additional benefit of showing you what R&D has in store for you on the coming turns.

Unfortunately this card hasn't seen a ton of play despite being a strong agenda. I think this is because HB isn't in the best of places atm, with only Sportsmetal doing pretty well. It doesn't help that it's a 4/2 and that there are a ton of great agendas to compete with, both purple and neutral. Making it a 3/2 would have been game-breaking though, so it is just an unfortunate reality.

I think this is a solid agenda to include, and I hope to see it more often. But in reality it is probably not quite good enough to make the cut.