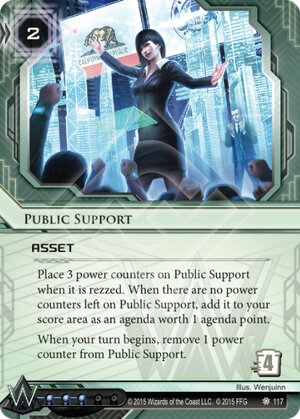 Illustrated by Wenjuinn Png
Decklists with this card

(Data and Destiny era)
Bigguyforyou518 1705
Why are you spending 2$click? — oconnor0 5 Nov 2015
@oconner0 : as long as the Corp doesn't rez it, the Runner won't feel the urge to trash it. — Lupus Yonderboi 5 Nov 2015
I think he was trying to insert the click symbol, and the formatting left it as the $ symbol. But it's 1 click to draw the card, 1 click to pay it (yes, drawing effectively costs a click, even if it's your automatic draw). — Bigguyforyou518 6 Nov 2015
Personally, I think that Public Support falls into the growing category of semi-taxing Weyland assets that cannot be suffered to live. Because there is an (albeit minor) credit swing in the corp's favor this card opens up a potential SEA Source window. I don't think that this card necessarily has a place in all scorcy Weyland decks, but certainly it can be used as a tool to bait the runner into making a run that causes them more monetary pain than it does the corp. — forktines 6 Nov 2015
I love Public Support because it combos beautifully in Gagarin and with Team Sponsorship, meaning that if you want to trash it, it has every means to come right back. — Mechanoise 6 Nov 2015
I've been using this card since it was released and my experience with it has been amazing. My opponents mostly just ignore it. But even when they do run it, it helps create scoring windows for me. I agree with pretty much everything you said about it. I've just had a good time with it. Could be the meta. I think it's a card that requires good timing and reading of the board state. It's not a card you throw down as soon as it hits your hand. — WayneMcPain 6 Nov 2015
I've played against someone who splashed this in Industrial Genomics, and now I never want to play them again. — Skeletons 6 Nov 2015
Question: When I remove the last counter on PS and have a active Team Sponsorship: does TS trigger? — feeling 12 Jan 2016
No because you don't "score" it but "add" it, there is a difference, same would go for Quantum Predictive Model(if acessed by the runner with a tag ofc) — Sutlomatsch 14 Jan 2016
4

(Data and Destiny era)
CapAp 908
You forgot to mention one of the best parts: you can sacrifice it to Archer and Corporate Town. It's not just that the runner is letting you have a point by ignoring it; the runner is also enabling some of you best weapons too. Also being at 6 points means the runner HAS to deal with it, and if it's sitting in a scary 3 ice server... or if you have multiple of them out and rezzed. I think there is a lot of nuance to this card that your review skims over. — WayneMcPain 20 Nov 2015
I disagree, because that's not really relevant to the way I'm juding the value of the card. 1-point agendas can also be sac'd to Archer and Corporate town. The reasons this is a poor asset slot (in most decks) are not affected by the fact that it's worth an agenda point of the runner lets you score it. This is the same reason that Domestic Sleepers is not an autoinclude in HB decks. — CapAp 25 Nov 2015