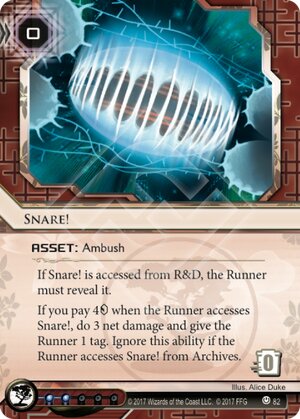 When the Runner accesses this card from anywhere except Archives, you may pay 4credit. If you do, give the Runner 1 tag and do 3 net damage.

(Order and Chaos era)
JAK 368
How about the mythical 7 credits (SnareScorch)? — Handsome Jack 30 Mar 2016
Rezzing Snare as Blue Sun to pull it back into hand is the best Netrunner play, tho. Did I reinstall Snare or Atlas? Run & find out. — phette23 11 May 2016
1 point about rezzing a Snare- if you're drowning in the Val/Blackmail meta, or even if you're seeing lots of Run Amok/En Passant combos, Snare is a free rez, which works incredibly well with Surat City Grid. It's obviously not why you include Snare in your deck, but I've rezzed a Snare on a Surat in my Titan Transnational deck to get my ice rezzed on my turn many times. It can completely shut down a few strategies. — LukeAriel 10 Jan 2017
1