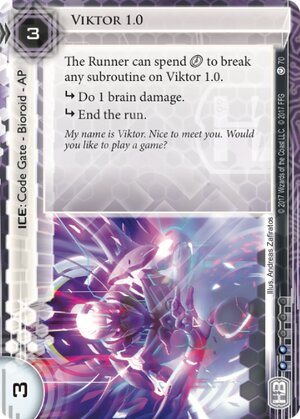 The Runner can spend click to break any subroutine on Viktor 1.0.

My name is Viktor. Nice to meet you. Would you like to play a game?
Illustrated by Andreas Zafiratos
Decklists with this card

(Escalation era)
Tirranek 559
It seems like most people use Enigma and skip Viktor. I can see this if all you want is a good early gear check. For the same cost Viktor is as good or better than Enigma against all Code Breakers and has synergy with HB click taxing, bioroid, and brain damage effects. — FightingWalloon 19 Nov 2016
2

(Breaker Bay era)
lynkfox 365
I think you are unfair on Viktor 1.0 here. In a meta without much or any Yog.0 he is actually quite taxing for a 3 cost ice. — Ber 27 Apr 2015
Agreed. Without Yog.0 he certainly has a lot better place in the world. Yog is still popular where I am, but it is true that in general the dreaded Yog has been drifting away from the mainstream, making Viktor a much more enticing bit of ICE. — lynkfox 27 Apr 2015
I find i often drop this boy in favor of enigma in HB decks as they are easily comparable. Enigma punishes the runner for running in early clicks where viktor ichi and other bioroids is weaker on the earlier clicks. Codegate breakers now a days are an intersting bunch, but for zu.13 he taxes like an eli to corroder, he requires a stealth for refractor. Best non-yog case is gordian blade but even that costs as much as rezzing him, which is often on the taxier end of ice. — GammaCodeX 27 Apr 2015
Worth pointing out he has fantastic synergy with Valley Grid, which is likely to be a staple of all the inevitable upcoming brain damage decks. — lolpaca 27 Apr 2015
Viktor 1.0 can be paired with Marcus Batty/Ryon Knight and Defective Brainchips etc. in a brain damage deck, but it is a rather janky approach. — Zakalwe 22 Mar 2016
2