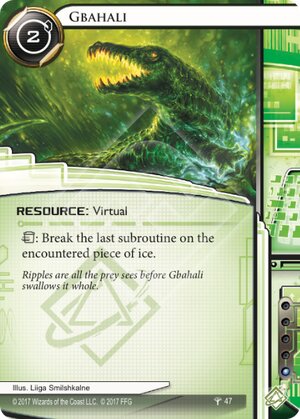 trash: Break the last subroutine on the encountered piece of ice.

Ripples are all the prey sees before Gbahali swallows it whole.
Illustrated by Liiga Smilshkalne
Decklists with this card

Gbahali is the counterpart to Kongamato, with its only differences being that it hits the last subroutine rather than the first, and that it costs one more credit to play.

You play both in the same way - either drop it on the turn you need to access something to bamboozle the Corp, or leave it on the board as a threat to force them to ice more aggressively.

I think Gbahali costs the extra credit because there's more ETR subroutines in last position than first? Enigma comes to mind, and I vaguely recall a bunch of Jinteki ice that has "Do X damage" and "End the run" as their two subroutines.

At any rate, both Gbahali and Kongamato are excellent cards that can squeeze you through a stack of ice in a pinch.