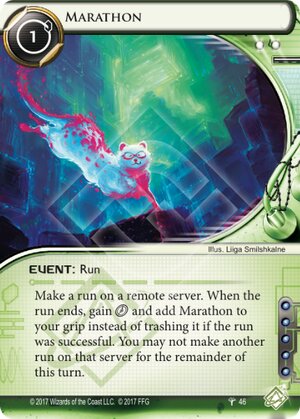 Make a run on a remote server. When the run ends, gain click and add Marathon to your grip instead of trashing it if the run was successful. You may not make another run on that server for the remainder of this turn.

"For when you absolutely, positively, have had enough of freakin asset spam."

The main reason asset spam has often been at the forefront of the meta for the past couple of years, was because of the inherent tempo their horizontal tactics gave them. While there have always all kinds of tools to get money and cards, there never has been a way to get enough clicks to both set up AND check every remote. And because of this, runners lost a ton of tempo checking and getting rid of assets which consistently cost more to trash than rez. It was either that, or forfeit the econ game to the corp.

And now in comes Marathon across the finish line. An event which does not trash itself, allowing you to keep playing it. This was you have all the clicks you need. Corp spends 3 clicks to make 3 new remotes? Play this and start your turn with 3 less credits, but still at 4 clicks and a lot wiser about the board state.

This card becomes absolutely bonkers when combined with other support. Got 3 Aeneas Informants on the board? Every run now nets you a 2 credit profit, provided the remote did not contain a must-trash asset. If you have the turtle out you get a juicy counter too. Very situational (janky?) but If you play By Any Means and Paparazzi you even get to clear every remote the corp has for free, provided you can afford playing this card over and over.

Is this card universally useful? Definitely not. The greatest weakness of this card lies in that it is match-up specific. If you are facing Glacier this card is completely useless. Even against decks which rely on a couple of remotes, this card is nothing spectacular. Also, good thing they made this 5 influence, because Anarchs (cough) did not need this card the way Shapers did. And another slight caveat, if the corp manages to make the run unsuccessfull by blowing up the server, the card trashes itself as you need your run to succeed.

But yeah, don't let that cute artwork fool you, Marathon is an absolute beast of a card.

(Council of the Crest era)
Cpt_nice 1715
Did you mean to link Self-Destruct where you linked Cyberdex Virus Suite? The latter won't trash Marathon but will kill your Aumakua though. — BlackCherries 2 Mar 2018
I like Kabonesa Wu's civet theme - we've seen her be Lean and Mean and now's she ready for her Marathon =D — BlackCherries 2 Mar 2018
I think the link on CVS is on purpose. CVS is an example of a 'trash me at instant speed' card that allows to render the server nonexistent during the run, thus ending the run neither successful nor unsuccessful, effectively trashing Marathon. — Krams 2 Mar 2018
What Krams said. I don't knoe a lot of assets/upgrades from the trop of my head which can trash themselves at any time. — Cpt_nice 2 Mar 2018
Ah I see what you mean now. NGO Front is probably another great one! — BlackCherries 2 Mar 2018
I'd say this card has potential in non Asset-Spam decks, too. Getting a click back for 1 credit seems not too bad. And in decks with more than 1 remote you still can get back Clicks for credits? — Sutlomatsch 9 Mar 2018
And for even more fun add 3x Aeneas Informant — Deo 23 Mar 2018