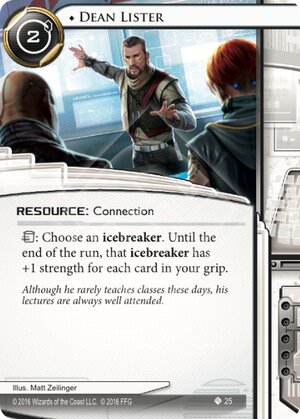 trash: Choose an icebreaker. Until the end of the run, that icebreaker has +1 strength for each card in your grip.

Although he rarely teaches classes these days, his lectures are always well attended.
Illustrated by Matt Zeilinger
Decklists with this card

Given that this card is a Connection and Unique, we can infer that it refers to a single character. So, with that in mind, is this:

Dean provides excellent value if you need the strength for more than one ice in a run. But how can you get value from Dean if the corp doesn't put all their sentries in the same server? By using ice that that can break more than one type of course. Most obviously, this means an AI breaker like Overmind, Brahman, or the newly released Mammon. Dean has anti-synergy with the King of AIs, which is probably for the best. Speaking of newly released cards, the smart person breakers can often be used multiple times a run much like an AI breaker. Furthermore, a code gate breaker is often useful multiple times per run with Kit.

Dean can also be a lifesaver in a deck that relies on fixed strength breakers.

(Terminal Directive Cards era)
thunderfist 31
Because Dean Lister uses a trash ability he's also good when you come across freshly rezzed ice that you could break by boosting your breaker more but you currently don't have the credits for. — Silv 30 Apr 2017