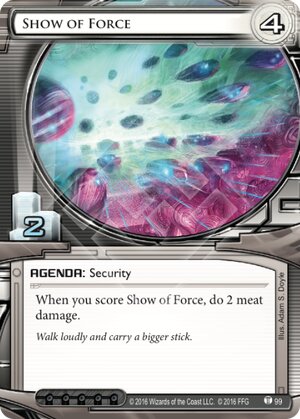 When you score Show of Force, do 2 meat damage.

Walk loudly and carry a bigger stick.
Illustrated by Adam S. Doyle
Decklists with this card

Oh hey, it's a neutral Vulcan Coverup, without the bad publicity, and worth more points! (Cue snarky comments about Weyland toys being free to other corps.)

But seriously, this card is interesting. I think it's generally worse than both Vulcan Coverup and Philotic Entanglement, (the other agendas that do damage when scored) but I think it makes an interesting supplement to both. It is a fantastic tool for shell games, and that's where I expect to see it the most.

Think of this card as sort of a mutated, high-stakes Ronin. If it has 4 advancement on it, then at any point on your turn, you can turn it into 2 meat damage, without even spending a click. This makes it really easy to combo with actual Ronin, and/or Neural EMP, for surprise flatlines out of nowhere.

It also has nice potential with 24/7 News Cycle, if you're going for a kill shot.

I don't think it will see much use outside of murder decks, but I think it has enough interesting uses there, to be worth consideration. It will be fun to see what people end up using it for!

(Martial Law era)
Bwob 480
plus it is great in Jinteki:PE as it will land 2 meat + 1 net if scored, or 1net if stolen — Him 18 Dec 2016
This is an amazing part of kill combos out of Jinteki PE, and it is a workhorse of my murder deck. In general, it is just as easy to score as Philotic, is less conditional, and I can run three plus Philotic. These greatly ramp up my damage potential. — cynchwyrm 26 Sep 2017