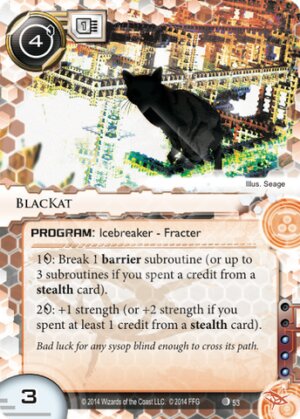 2credit: +1 strength. If you spent at least 1 credit from a stealth card to use this ability, instead +2 strength.

Bad luck for any sysop blind enough to cross its path.
Illustrated by Seage
Decklists with this card

(Up and Over era)
kage02 487
I think it's pronounced BlacKAt. This is a reference to black hats, which are the "evil" side of the hackers (unlike white hats). The fact that BlacKat is an anarch card strengthens this idea. — Lokh 27 Mar 2015
8

This is by far the least popular card in the stealth suite. And that's a crying shame, because it's really not a bad card.

Compare it to the gold standard of fracters, Corroder. Corroder installs for two, boosts for one, breaks for one, and has a base strength of two.

If you don't have any stealth credits, BlacKat installs for four and boosts for two, which is gross...but it has a base strength of three, which helps to offset this slightly. If you're breaking a barrier with strength 4 or less, BlacKat gets you through at the same cost as Corroder, or even 1 cheaper if you happen to be breaking something with a strength of exactly 3.

But barriers have high strength, that's sort of the point--what they lack in punishing subroutines, they make up for in stopping power. And as soon as you start seeing Fire Walls or bigger, BlacKat starts to hurt badly for any runner without stealth credits.

With stealth credits, the kitty does become quite efficient. A Dyson Fractal Generator fueling a Corroder saves you one normal credit per turn--marginal at best. But on BlacKat, that same DFG will save you 3 per turn--either you spend the credit to break all the subs on Spiderweb, or you spend 1 stealth + 1 nonstealth where previously you would have paid 4 non-stealth credits.

One stealth credit makes NEXT Silver trivial. Two credits makes Hadrian's Wall reasonable, and three gets you through Heimdall 2.0 only 2 real credits. And if you can get up to 4 stealth credits, even an outside Curtain Wall will fall for only 5 out-of-pocket credits.

This is the problem, though. Getting to that many stealth credits means you cannot rely on Cloak and Ghost Runner alone--you have to use Dyson Fractal Generators if you want to be able to get through two big barriers in the same run. If you're not running Anarch, that kills influence at a truly alarming rate--3x DFG and 2x BlacKat is your entire influence package. And that's really, really hard to justify, when Corroder is only two, and is about as good most of the time.

(The Universe of Tomorrow era)
tiedyedvortex 4694
4

In my view this is the solid card that does not get played. It is also built in a way I wish that the in faction stealth cards would be build, super efficient with Stealth credits yet usable without.

In my mind there are a few things that stopped this from being examined. Firstly Criminals would not want to spend the influence involved as it really needs either a Cloak or Dyson Fractal Generator

Next you have Shapers who received Cerberus "Lady" H1 which unless you were going extremely heavy stealth gave you no reason to spend influence on this.

Finally you have Anarchs who then received Eater, Faust, DDoS and more ice destruction. Why spend multiple cards getting in easy when you have a broad tool that work with your other tools. These tools have even pushed out Corroder from being used in faction which many consider the best non AI Icebreaker.

Maybe with the MWL hitting Lady we may see Stealth Shapers consider this as even without stealth credits this is just as efficient as Corroder on Ice atrength 4 and bellow.

(Data and Destiny era)
Zail 12
The problem I see with it, that you gain to corroder only on ice with multiple subs and even loose to 4 strength barriers when pumping. As of now I rarely see those being played besides Eli (breaks even), Curtain Wall (1cr gained for 2 stealth-cr) and Spiderweb(2cr gain). — Capstone 28 Jan 2016
I think the issue is that Stealth Credits are a hot commodity — xanadu84 29 Aug 2016
Any deck can throw in some cloaks and a handful of Lockpicks/DFG/Silencers and call one ice type handled. With a lot of work, Ghost Runner, some more memory for more Cloaks etc you can get enough to handle 2 ice types. efficiently. Once you try to put together the credit support for a full stealth suite, you barely have room left for the breakers. And while Refractor is super awesome and Kits BFF, and Daggar/Switchblade crazy powerful, BlacKat is just a solid, flexible breaker. But so is Corroder. The Fracter is the easiest place to preserve those stealth credits. To top it off, Shaper has the best tools for supporting Stealth, and the lions share of the stealth cards, followed by Criminal. the Anarch breaker is the most likely to cost influence, and the influence is not small. Of course, now we have Mirror, and Smoke very soon, plus whatever else for Stealth support. Maybe we will be able to support a whole stealth rig, and it will be worth the influence. However, now, instead of competing with a non-stealth option in the weaker, cheaper Corroder, its competeing with the equally strong, recurrable, only less efficient against low strength, many subroutined barrier, Paperclip. Blackat may not get a time in the sun. — xanadu84 29 Aug 2016