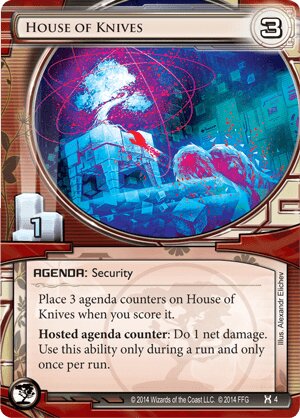 When you score this agenda, place 3 agenda counters on it.

Hosted agenda counter: Do 1 net damage. Use this ability only during a run and only once per run.

House of Knives caused a huge stir on release. Unlike many such cards, it's only gotten more valuable with play, becoming practically indispensable to many Jinteki builds.

Agendas come in two varieties: those that give the corporations an undeniable advantage, like Priority Requisition, The Cleaners, or AstroScript Pilot Program; and those that protect themselves, like NAPD Contract, Fetal AI, and The Future Perfect. House of Knives is clearly in the former camp--the ability is much stronger than the points it's worth.

Furthermore, since the agenda is only one point, it works well as a "test case" against runners. Versus Jinteki, runners tend to separate into "never run remotes" or "always run remotes." HoK gives an easy test early in the game. If the runner hits it, well, that's not the worst outcome. If they don't, scoring it is easy and quite the coup for a corporation in the early game. Since it's so powerful and can be played with little fear, House of knives is best thought of as a "utility agenda", like Clone Retirement or Domestic Sleepers.

The ability itself is somewhat tricky. As with all Jinteki cards, it works best by threatening a flatline, and therefore dissuading accesses. I say accesses rather than runs, as it can only fire a single net damage on a run, and only once per run. This ability, while useful in a "zaps" deck like the famous Cambridge Jinteki: Personal Evolution, excels whenever the runner is at a breakpoint. If the runner is about to access two cards and you bring them below 3 cards in hand, does the runner risk taking a Snare!?

Experienced Jinteki players know that fear is as powerful a tool as flatlines. Firing a HoK counter just before the runner's last chance to jack out tends to slow them down, even if they are very experienced. If they don't access, then that is as good as a Nisei MK II token. If they do, then Jinteki should have enough tools to punish the runner. The last counter should be reserved for actual flatlines. There are typically options to use it when the runner is committed, such as when they're face-checking a Komainu, before the subroutines fire.

As with all cards, House of Knives works best with support. Having many sources of damage, such as Mamba, Neural EMP, and Ronin amplify the pressure. Running ambushes is practically mandatory. Standard runner practice is to treat a scored House of Knives as brain damage, so more brain damage may end up locking runners out of running safely.

The best card to compare House of Knives to is Nisei MK II. Both dissuade big, eventful runs, and do so in a way that the runner really can't disrupt. In another way, it's like a Punitive Counterstrike, in that a single wrong access could spell doom for the runner. However, the way the agenda tests runners is far more valuable than either card would indicate.