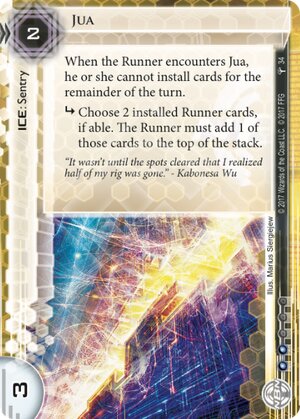 When the Runner encounters Jua, he or she cannot install cards for the remainder of the turn.

subroutine Choose 2 installed Runner cards, if able. The Runner must add 1 of those cards to the top of the stack.

"It wasn't until the spots cleared that I realized half of my rig was gone." - Kabonesa Wu
Illustrated by Mariusz Siergiejew
Decklists with this card

Jua is a cheap and unassuming sentry with the possibility to really bite against the right deck. Even when broken by some of the most efficient Killers that match up well against it (Mimic, Na'Not'k with two or more ice, and Bukhgalter on the first break) it'll tax 1, which is perfectly respectable for ice that cost only 2 to rez. For less conventional breaking, 3 strength is passable for resisting Chisel and Aumakua, but of course the single subroutine leaves the possibiltiy of being broken by Boomerang.

As for letting that subroutine fire, that depends wholly on the runner's board. Obviously against a blank rig Jua's subroutine is effectively blank too, so it's not a great way to defend a server on the very first turn, but given its a cheap porous NBN sentry that was always going to be true. The subroutine can in some scenarios backfire, forcing you to offer the runner to topdeck a spent virus such as Imp or Pelangi, but thankfully the tempo loss of redrawing and replaying something like an almost empty Earthrise Hotel or Daily Casts is substantial enough to not make that a real worry. Also there's only so many times most runners can run with only one card they don't want you to bounce installed, so I kind of doubt this downside will come up often in play. Typically, firing Jua's subroutine is going to be a steep tax of tempo and could even remove cards the runner needed for the remainder of the run, forcing a jack out.

On top of that though we have the wacky encounter effect which could be useless or severely punishing depending on the matchup. Anarchs and Shapers tend to be the factions with the most effects encouraging them to install cards during a run, which can make an unrezzed Jua a nasty surprise when they were expecting to have access to the Flashpoint conspiracy breakers or to use Self-modifying Code or Simulchip to protect themself from dangerous ice. Hilariously, even if your opponent does get MKUltra onto the board its 3 to break Jua, making this card a brutal pick against self-milling Anarch decks. The effect lasts for the remainder of the turn too, so it's not like they can jack out after Jua, install a sentry from grip, and then run again. Against Criminal there's not much you'll shut down in this manner, although I did get to experience Jua being effective at closing off a server being farmed for Crowdfunding runs while that silly card was still legal.

Honestly with Self-modifying Code continuing to define the flow of runs in this beautiful game, I'm surprised we aren't seeing more of Jua. Anarchs may have lost their precious Inject making the conspiracy breakers a bit weaker, but many players are making up for that by importing SMC anyway, so go figure. I suppose it is somewhat getting muscled out by the other cheap NBN ice that we've all gotten used to treating as staples.

My understanding, and I'm happy to be proven wrong here because I used Jua for a time against Crowdfunding decks aswell is that the Corp rezzes on approach, the runner has the paid ability window before the encounter so they can pop SMC to install a program and then move to the encounter phase where the encounter text triggers.

ValkyriezGaming is correct. It doesn't work against SMC. It also isn't great against heap breakers and as you stated, other breakers deal with it easily. Sure, it is 2 to rez, but NBN are the masters of cheap taxing ice. This doesn't compare favorably at all to Turnpike or Newshound with a current. Data Raven costs more but is also nearly always gonna be way more taxing. I think this ice is solid but not good enough in a post-Crowdfunding meta.

Thanks for the correction regarding SMC! Definitely a lot less powerful than I thought in light of that.