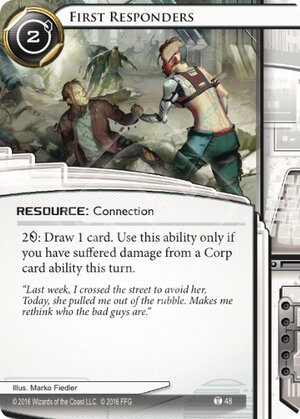 2credit: Draw 1 card. Use this ability only if you have suffered damage from a Corp card ability this turn.

"Last week, I crossed the street to avoid her. Today, she pulled me out of the rubble. Makes me rethink who the bad guys are."
Illustrated by Marko Fiedler
Decklists with this card

As a 0-influence neutral card this could see inclusion at just about any level.

I wonder at the cash econ of 4 credits for 1 card but that doesn't really have to be the end does it?

There don't appear to be any good runner cards that benefit you for drawing a card. There is Net Mercur which would let you spend a stealth credit as part of the 2 cost and draw a card and either draw another or replace the credit. Not an efficient use of the two cards but a better deal at 1 real credit per card.

One difficulty here is that you can't damage yourself and not all corps are going to have damage dealing cards in their deck. This could fairly rapidly turn into a dead draw if you're playing against fast advance or some other deck that doesn't care what you're running.

(Escalation era)
killj0y 59
It isn't just 4 creds for 1 card, it might as well be 10 creds for 4 cards... Once you take a singgle point of damage the paid ability stays usable for the remainder of the turn. It might be expensive, but you can use this to draw lots of cards after taking damage, easily refilling your hand or preparing or your turn if you take damage on the Corp turn. — Krams 18 Oct 2016
Also more importantly you can draw up after getting hit by damage and before getting hit by MORE damage in order to avoid being flatlined. Won't help against BOOM! most of the time, but other stuff... — LordRandomness 18 Oct 2016
So kind of a runner side panic button? Still would be nice if you could somehow ensure that the corp is going to damage you rather than just hoping. I don't think this is going to replace I've had worse for damage avoidance even if plascrete cycles out. — killj0y 20 Oct 2016
This is insurance against #traffic accident + #scorched earth combo. — Xh4rx4d 9 Aug 2017