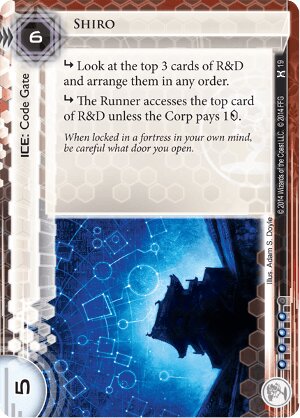 subroutine Look at the top 3 cards of R&D and arrange them in any order.

subroutine You may pay 1credit. If you do not, the Runner breaches R&D. They cannot access cards in the root of R&D during that breach.

When locked in a fortress in your own mind, be careful what door you open.
Illustrated by Adam S. Doyle
Decklists with this card

Though interesting; this ice falls flat on it's face once the Runner reads it and realises they are better off only breaking the first subroutine; rendering the second one a risk or a credit drain for the Corp; especially if the runner has R&D interfaces for their multi-access.

Reasonable but not amazing when the runner can't break it; a mere 4-5 credit tax and a credit drain at best once they can.

This ICE should either have been strength 7 to counterbalance the credit drain, or the first subroutine should have been an on-encounter ability; heck, it would be better if it simply didn't have that second subroutine, or better yet, if it was pay to force the access instead of pay to prevent!

(The Underway era)
Quarg 256
Does a 5 credit tax for 6 credits really qualify as "falling flat on its face"? I think a brief look at most other ICE would reveal that statement doesn't make any sense. And how would the ICE be better without the second subroutine? It gives the corp more control. You can run them into a trap, or a card you don't mind them seeing. And if all 3 cards are agendas or assets you don't want being touched, you can CHOOSE to effectively end the run. These are all good things... — Bigguyforyou518 25 Jul 2015
I think what he's trying to say is that if the runner can break the first subroutine, then the Corp must pay 1 additional credit every time they encounter the ice so they don't get to access a random card off RnD. So in addition to the 6 to rez it's 1 to keep the Runner from accessing more cards then they should. Admittedly against Jinteki random accesses of RnD are dangerous but there's definitely a possibility of them pulling agendas they shouldn't have. — StashAugustine 25 Jul 2015
If this is the inside ice on R&D then why would the corp need to pay 1 as the Runner will be achieving the access in the first place. — Zail 16 Dec 2015
5

Filtering the top of R&D is potent, and if Kitsune is any good, Shiro also has potential... Any time a piece of ice comes in at four influence it has to be worth checking out.

• High strength to rez cost ratio, though not as good as some Jinteki code gates. Two subroutines, as well.

• You can run the "filter" from any server, so while R&D might seem obvious for the install, Shiro can do good wrk on HQ or Archives as well.

• Unbroken, the first subroutine gives you information about the cards coming in the next turn or two, allowing you to plan ahead, or shape future turns.

• No end the run, but what Jinteki ice does?

• If your R&D is going to flood Agenda, this doesn't prevent access.

• Gives away information to the Runner unless you spend to avoid it.

• Just like Architect you can set up a big piece of ice for Mutate. Just remember taht you have a mandatory draw first.

• Ambush cards that work from R&D: Snare!, Shock!, Shi.Kyu, Space Camp are great. Those that need to be installed to fire: Project Junebug (and sim.), Psychic Field, etc. will fail. • If installed over R&D and you show the Runner a non-porous card (Ice, Operation) then they know the rest of the run is useless unless they have multi-access.

• Red Herrings rezzed in R&D will work if you have to flash an Agenda at them - spend the 1 rezzing the Upgrade instead!