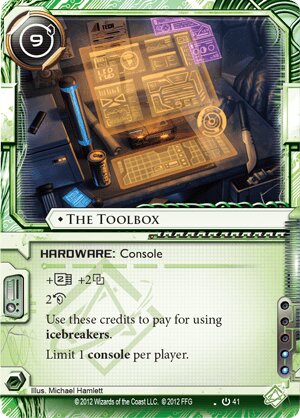 Use these credits to pay for using icebreakers.

Illustrated by Michael Hamlett
Decklists with this card

Out of the three consoles given to us in Core Set, I used to despise this one the most.

This reminds me of what dad used to say: I have no son.

Compare Desperado. Gives you one mem and also one credit for every run that is successful. Definitely has its merits, yes, but the run has to end in an indisputable success in order for you to claim your prize. And, let's face it, you are not going to run more than two times a turn, save for the rare occurences when you'll really have to, and rarely all of them will really be successful. You either run good or run a lot.

Toolbox gives you two creds. Up front-like, no matter how many runs you are going to make during your turn, you get two creds. The catch? They have to be spent using icebreakers. And you know who uses icebreakers a lot? Yeah, you guessed it - everyone. It is your favourite black hole you try to clog with money bills after you're about done setting your rig up. Refunds really quickly, too, as these are two creds a turn you won't spend on breaking subroutines - you can now spend them somewhere else.

What else is in the box? Two mem units. Mostly useless, except, you know, for the cases when you'd like to have your full suite of breakers, a backdoor or a bitcoin miner AND a sniffer. So yeah, useless. Totally. Right?

And two additional links, because every good workplace has at least a solid sheet of tinfoil to make hats with. What's there to do with two links? They enable cloud breakers right off the bat, for instance, which lets you drop even more things on the board. Avoiding certain death by helluva tags and missile launchers is made a bit easier. Only a few brands of lesser tracer ICE will get neutered like a kitty-cat from a good house, but most of them you'll see blunted just enough to avoid any serious harm they might've caused. Link is a really a good thing to have which most of us completely underestimate.

To sum things up, it is kinda double Desperado with some additional link to sweeten the deal. It also gives you creds indiscriminately, no matter if you manage the run or not, while also enhancing quality runs over quantity of runs.

By the way, do you know what is a cool multifunctional console that doesn't cost nine creds?

The answer: Modded Toolbox. That's a joke I've just made up. I know it isn't funny. Shut up.

(Fear the Masses era)
H0tl1ne 379
In the tag meta right now, the 2 link is worth a lot more than it used to be. Be able to dodge a CtM trace for 1 and getting a discount on a lot of tracer ICE is further economic advantage. The nine cost is a huge hit and one you can't afford against decks that are rushing, but you usually make up the cost and then some over the course of a decent length game. — FightingWalloon 13 Jan 2017
4

While the abilities on the Toolbox are great, giving quite a bit of a bonus to the runner who plays it, its nine credit cost makes it rather difficult to get it out, and even when installed, that credit cost is usually a huge tempo hit to the runner, opening up a scoring window for the corp to react.

The Toolbox’s abilities are somewhat powerful, if limited. Two MU and two Link can turn on a lot of programs. The MU is great for the likes of Sage and Overmind which combo’s well with the link that will enable the Cloud Breakers to stay off the MU bonuses Sage and Overmind take advantage of. Two credits allows Sage to break any one subroutine ICE it can interact with for effectively free, and there is a large synergy between these cards.

The price is what holds the card back however, the tempo hit from installing it and possibly opening a scoring window. However, economy continues to creep onward, becoming stronger and stronger such that Toolbox may one day see its day in the sun.