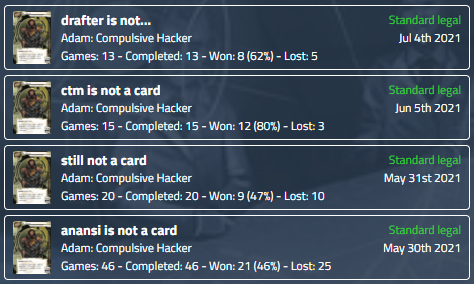 pictured: my COPIUM of choice over the past few months

2nd (again, hence the name) at @ValeNetrunner's Async Standard event. Iterations of this deck went 3-1 in the Swiss (we were allowed to switch up decks between rounds), and this particular version went 1-1 in the cut.

PSA: If you wanna try this deck out, do the sensible thing and not be a smartass like I was; take out DJ Fenris and Na'Not'K, and add in Odore and Earthrise Hotel.

Everyone's favorite bioroid runner hasn't been getting much love in the meta since Gateway/SU21 dropped. Sure, Apex is a total meme, but his signature card is omnipresent in this meta, and Sunny decks have been making showings for themselves here and there in the past couple of months. Well, here is my humble attempt at putting best minifaction boi on the map!

First, a primer on why the hell anyone would anyone want to play this guy in the first place:

Find the Truth, Neutralize All Threats, Safety First are your starting directives of choice in 99.9% of scenarios. I've experimented starting with Always Be Running over NAT in hyper-specific matchups such as HHN-less NEH asset spam, but in general, don't try this at home kids.

Logic Bomb is absolutely nutty, and fuels much of Adam's early remote and R&D pressure. It's astounding how many free points you'll get from FTT reveals in combination with this card in the early game, not to mention NAT HQ accesses.

Brain Chip is the payoff for your early aggression, and lets you fill up your rig with Rezekis and Multithreaders to keep you going into the mid and late game. Threaders especially are excellent at maintaining HQ lock and keeping the corp honest without losing tempo.

Emergent Creativity is the glue that holds it all together. It gets your console, it gets your breakers, it gets Threaders when you're establishing the lock, it pitches duplicates to go below handsize for SF, it's amazing. Speaking of which...

Engolo and Paperclip form the basis of the breaker suite (wooo, big surprise there, I know). Engolo in particular is notorious for being the go-to one-and-done breaker for many runners, but two things make these breakers stand out in particular in Adam:

1) Threader creds can pay for the Engolo paint effect. The efficiency of this interaction can't be overstated!

2) Clippy can be pitched to Creativity for a free 4c discount!

The killer of choice is a much more sticky problem, and I've experimented with multiple options. Bukhgalter is the gold standard if you can shell out the influence, Femme Fatales are the OG Creativity target but absolutely suck if you don't draw both cards together, Odore is functional but is shockingly bad vs Ansel 1.0 without further Anarch support cards.

Political Operative is a consideration in any deck that applies HQ pressure, and even more essential if you want to contest remotes in this age of SkunkVoid. I play 2 copies because I really want to see them, but it's possible that shaving a copy is correct.

Speaking of HQ pressure, Tread Lightly is something I've been experimenting with and found to be overperforming for its credit and influence cost. It really isn't necessary to save it for that juicy triple unrezzed remote, honestly just using it as a fire-and-forget missile is usually enough to get the accesses and FTT triggers you really want. That being said, it's worth noting that Tread+Logic Bomb gets you into almost any double-iced server in the early game, and this combination really needs to be respected more.

Liberated Account is the econ of choice here, and there's arguments to be made between it, Telework Contract, and Creative Commission in the deck. Liberated edges it out for me because of the Career Fair synergy, but personal preference probably plays a bigger part here.

T400 Memory Diamond is a budget Brain Chip that you can play if you're in a tight spot MU- or grip-wise in the early game, before any points are scored. It even pitched to Creativity later so it isn't even a dead draw. Never been unhappy to draw it.

DJ Fenris: if you're a dumbass like I was and decided to play the cool card instead of the smart card, Steve is the default selection, because recurring Bombs is really soul-crushing for the corp. Quetzal is the alternative versus BTL, because breaking Akhet the normal way is a real pain in the arse.

Other cards for consideration:

Boomerang is a common suggestion, and does have a lot of synergy with the gameplan, but I got greedy and shaved them into the Tread Lightlys to squeeze more econ into the list. I haven't missed them as much, but maybe they'll make their way back in, who knows?

Reclaim is unironically playable in Adam, because pitching cards isn't necessarily a bad thing here, and even a bad Bomb is still a Bomb.

RNG Key... eurgh. It sounds great on paper in combination with FTT, but in practice all it does is bait you into bad running habits, running R&D for a single access where you could be running HQ for pseudo-3 accesses instead.

Adam has been the most fun I've had playing Runner in this Standard meta, and one day I swear I'll win an event with him. In the meantime, I'm always happy to talk shop about our boy here, and you can find me under @Jai on the GLC Discord channel if you wanna discuss, or even ask me about how the deck works!

Shoutout to @Ed and @nbkelly for the tech talk and prep for the top cut, and the Drop Bears in general for the moral support!