It was a cold bleak night and Rotage1 had been walking for a while now, he knew from the beginning that this recent assignment would be tough but he hadn't appreciated how tough it would be.
For weeks now he had been on this assignment, none of the other Rotages knew about this assignment apart from Rotage0 who had assigned it to him.

Even Rotage himself was not aware of this, but that was the only way, as if he know what it was he would have stopped it
Rotage1 too had pondered the wisdom of this assignment, but it was time something was done, although bad things had happened in the past, they couldn't forget him and now they needed him back urgently to solve the issues they had.

He looked down at his Assignment again
"Find him, at any cost, find Rotage2"

So onto the list, I had tried various lists in all sorts of different factions but most of them ended the same way with the runner having too much econ and there was nothing I could do.

I was trying HB lists as I have missed playing sports and I started to try lists with Mason Bellamy. The ideas is not new use Mason Bellamy with ETR ice and Border Control to deny the runner enough clicks to access the remote.
In reality this didn't happen a lot but with Surveyors the remote was very taxing late game and you could win the game from the remote itself.

Agendas - My favourite agenda suite with 9 agendas using GFI to force the runner to steal 4 and allowing me to take 3. It did have 3 GFI originally but I wanted 2 Surveyor and 3 Border Control and this was only way to make it fit
Econ - I thought there would be enough econ here but often I found myself poor with a lot of my econ being 1 trash (Rashida, VLC and NGO) IPO has suggested which would be good but I am often poor mid game so would probably need to change how I play the list
Ice - 20 ice what is this 2014, not its still 2021 I just figured with ice destruction rather then using recursion I'd add more ice, but with my econ being trashed I might drop some ice for a restore. Otherwise ice suit is fairly standard. Drafter was great as I always had stuff in archives to bring back
Other Stuff - Jinja was great for building the remote up quicker and cheaper, I rarely got Mason Bellamy to work as intended although it was fun vs Indexing, Ash was a good include as it just ensure they couldnt get into the remote

So the deck did really well and its something I will look at further. Changes would likely be getting some recursion and/or non trashable econ possibly at expensive of some ice. I'd drop a Mason for an extra Ash as Ash proved more useful on the remote.
The other change would involve Ikawah Project which I had forgotten even existed and would go well with Mason, however I feel then you would need to change the whole agenda suit around and you'd lose some econ agendas and then make sports less useful so you might switch to an Asa list instead
Happy to hear any feedback on the list

Thanks to Imrahil, Hyperbolic_Mess, SteffMonkey,Swiftie and Thorn for helping test the list, provide ideas and for chat between rounds
Thanks to Quarkbutter for running an excellent event
Thanks to my opponents for being great fun to play against

Finally the image below was inspired by SteffMonkey my opponent in the cut who had to decide between trashing an Ash or Mason Bellamy, I still don't know what the best option was! 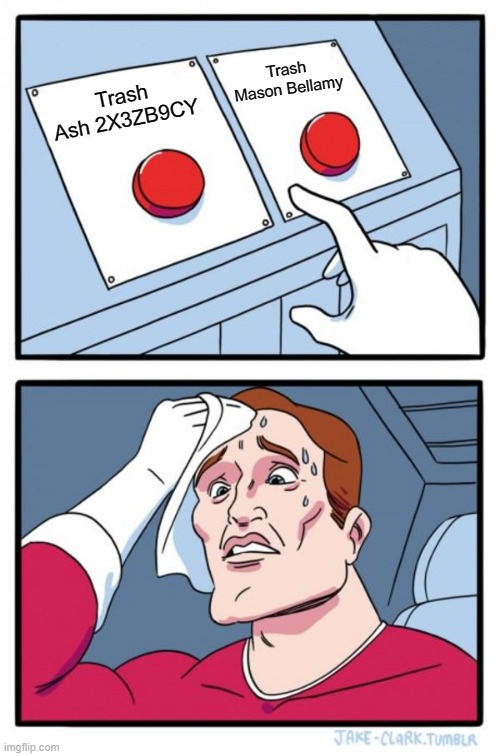