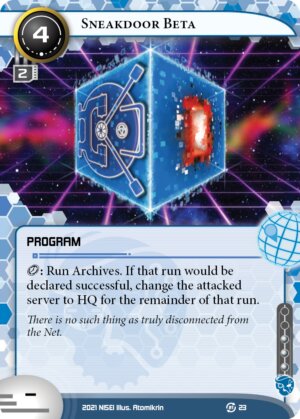 click: Run Archives. If that run would be declared successful, change the attacked server to HQ for the remainder of that run.

There is no such thing as truly disconnected from the Net.
Illustrated by Atomikrin
Decklists with this card

This is one of the few cards where you immediately realise how good it is. Even with only a couple of games played you'll get this into your hand and try to hide the grin at the (likely) unopposed runs you're about to make. That said, there are a couple of mistakes I made when first using this card that seem to be quite common:

(The Liberated Mind era)
Tirranek 605
"Then install this and truck 'em in the kidneys." I can't. Laughing too hard. A++ review. Please write more of these. — TheBytemaster 15 Jun 2016
Playing Sneakdoor Beta got a lot funnier once I began thinking of it as of 'trucking the Corp in the kidneys'. This guy deserves a cigar. — H0tl1ne 16 Jun 2016
"truck 'em in the kidneys" got me! Eyes are watering with laughter. That will be the name of the next deck I make. — NETW4LKER 21 Jul 2018
4

I recently started playing, with the NISEI Core Set Experience format. I thought I liked Anarchs. After playing with this card once. Criminals became my favorite faction.

In the short term, there's the surprise factor the turn you install this. In the long term, this card takes the tax that the Corp would place on getting into HQ, and lowers it by roughly 50% (!), as they now have to spread thin to defend both servers.

(System Core 2019 era)
Blackhaven 16
Once you get into the larger cardpool, you can do the same thing by playing Omar. Better yet, Rebirth into Omar out of Val for the surprise factor at 0 cost 0 MU and 1 influence. — Shishu 12 Apr 2019
2

For 4 , and 2 you force the Corp to spend at least , potentially as much or more and ice to defend Archives. Combined with Desperado, you'll earn your spent on Sneakdoor within a turn or 2. Combined with Doppelgänger, you get an additional surprise HQ access that turn. If you are running a typical 3 breaker suite and a Console, Sneakdoor is an absolute must (especially for Gabriel Santiago: Consummate Professional!) Nothing makes the Corp bitter more than having to dedicate time and resources to defending a mostly obselete server.

(Order and Chaos era)
LynxMegaCorp 1339
It's also awesome in shaper as a one-of: you can test run it and take the corp by surprise (works best with HQ interface or Nerve Agent). — Bananifier 27 Mar 2015
Wisdom at its best - thanks for clarifying its uses in Shaper! — LynxMegaCorp 28 Mar 2015
Can this card be used in combination with Account Siphon, or do the triggers not align? — chris_walker 17 Sep 2015
Nope, to trigger the click ability is an action and to play an event is another, which can't happen together, since siphon requires to directly run to hq. — yqqqsm 18 Sep 2015
2

Sneakdoor Beta is a card, that in startup at least, I think will excite a lot of new players before they use it and realize that while it is not bad, it is not necessarily as amazing as it looks at first glance, requiring a reasonable amount of support to reach it's full potential, and in Startup, that support might not be enough. The dream here is the corp spends lots of time icing up HQ, they think they're super safe and have lots of agendas in hand, when the runner slams this down and then gets into HQ 3 times for free, getting all of the agendas. This is a beautiful dream of course, and not impossible, but I think not really as likely as one would hope. Since I'm starting off so negatively, let's look at some cons first.

Cost: 4 is not a super high cost, but it's not a cheap card you can casually throw down. It'll probably have to be done with at least a little bit of planning. 2 is a pretty high cost as well, and even late game will crowd your memory, unless you've got your full suite of DZMZ Optimizers out.

Click to Run: Click to run cards can be pretty good. Red Team is a pretty useful tool early on for runners. However, I'd say that for that the economy is more important - you're getting 3 creds and also potentially getting a sweet access at the same time. However, for Sneakdoor Beta, since you're clicking to run, you're locked out of your nice HQ multi-access, namely Jailbreak and Legwork. You do have Docklands Pass, but you are locked out of those really big amazing HQ runs. And single accesses are downright sad. As a Corp I've giggled when a runner installs this and wastes 3 clicks running HQ when I have no agendas in hand, knowing they can't be sure if they're getting unlucky on their picks or if they're just unlucky overall.

Meta: Startup in general is not a meta which is adverse to icing up Archives. Red Team, Security Testing, Leech all benefit from running an unprotected archives. Corps might even ice up archives before dumping some agendas in their and reshuffling with Spin Doctor, just so it's not totally free. While most corps aren't putting their best ice here, something still taxing might show up, and hey guess what, you're probably running low on space for breakers since you had to install this.

So when is Sneakdoor Beta useful? It really shines when it has other cards along with it that want you to get into HQ, however Startup doesn't have too many of those. Steve Cambridge: Master Grifter is probably the runner happiest to use this, since he now has 2 routes to get into HQ and get a card back, and he can choose the easier path. The aforementioned Docklands Pass also gives you that necessary multi-access. The other two cards which reward the runner for getting into HQ in startup are Lucky Charm and Emergency Shutdown. These can both be powerful effects, and you could set up a turn where you play Sneakdoor -> get the free HQ access -> Derez their Archer -> Run the remote and stop the Anoetic from ending your run to steal the game winning agenda, but that is another beautiful dream that is even more convoluted than the first one.

The other place this can be useful is with Tāo Salonga: Telepresence Magician, since it will usually force at least some kind of ice on Archives, and with Tao's ability you can really start moving the ice around to right where you want it. If HQ is very unsafe since there's now two paths to get in, corps are going to be desperate to install agendas, and shaper has great tools for digging in R&D, and has the DZMZ Optimizers to make this affordable.

Overall, Sneakdoor Beta is a very powerful effect that I think doesn't have the support required to really make it a great card in startup, but in a few cases it can really do some work.

I think any criminal deck that doesn't rely heavily on run events can benefit from Sneakdoor as a 1-of. The possibility of it hitting the table and giving you a turn of 3 free runs into HQ once, or enabling the derez on the scoring remote, either of those scenarios can win a close game - the first is aided by the pass and the second requires the shutdown. Another card you didn't consider is The Gauntlet. But, I hear you say, that's anti-synergy! No, no - it's sideways synergy. It is mind games. The corp has a limited number of ICE in the deck. Where are they gonna put them? Pile them up on HQ? If you get through anyway, Gauntlet gives you big multi-access. Spread them out? Then it's easier for you to go in directly. If you have both the glove and the back door, whatever the corp picks is wrong. Essentially, the two combined make the older review's "operation twizzling fist" even more effective.

My reviews only consider the Startup cardpool. And I'd be wary of just splashing it in since you'll need to make sure you can support the MU for it - if you're using any programs past 3 breakers (with console) you'll have a problem.

It's not the powerhouse it once was, maybe, but it's still enormous out of Steve and Zahya.

The previous review are all super good, so instead, I will add some synergies that are fun to play with.

Second is with Rejig. Early or late, once you put Sneakdoor Beta, you will get a few run out of it before the corp ice up archive. At which point, you can use Rejig to uninstall Sneakdoor Beta and install SOMETHING ELSE for 4 less (and freeing ). On top of it, you will still have Sneakdoor Beta in hand if it could come in handy.

Otherwise, the mere fact of forcing the corp to ice up archive (especially if you have a Docklands Pass installed). You can for the corp to rez its archive ices. Then stop using Sneakdoor Beta and hammer anything else (which is now less iced). But you already understood that.

This card is one of the few game changing non breaker program of the game. It is well worth the investment. Nice graphic and quote too!

Did you mean Docklands Pass? Docklands Crackdown is a Corp card (that doesn't seem to fit the sentence).