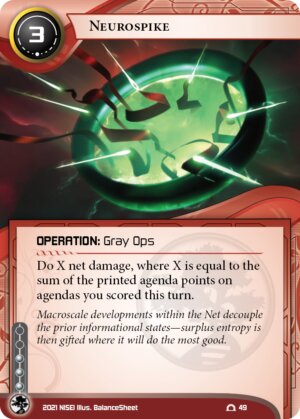 Do X net damage, where X is equal to the sum of the printed agenda points on agendas you scored this turn.

Macroscale developments within the Net decouple the prior informational states—surplus entropy is then gifted where it will do the most good.
Illustrated by BalanceSheet
Decklists with this card

This review concerns mostly experiences in Startup. I don't play enough Standard to claim to know the meta.

So, oddly enough, I've found this to be a good combo kill... in HB. I don't think it is impossible to pull off in Jinteki either, but I found that HB is just easier to put this in. Running Haas-Bioroid: Precision Design you can play only 6 agendas (3 Project Vacheron, 3 Vulnerability Audit). Seamless Launch is probably the best card in the meta right now if you want advancements on things, and between some reasonable ETR ice, Sprint, Nico Campaign for money and draw, some Spin Doctor and Archived Memories for recursion, you've got yourself a kill deck. Manegarm Skunkworks protects your server.

Now, I'm not going to claim this deck is very reliable or even tournament-competitive. It mostly relies on the fact that you are so agenda-light that runners need to work for those points, and that if the runner isn't careful, they might just get flatlined out of nowhere. If you can double-advance a Vulnerability Audit, a Seamless Launch + double Neurospike kills. Don't forget you get to pull one card back with your ID too.

I have also toyed around with a list that ran Luminal Transubstantiation but I ran into issues playing 2-pointers, mostly that I needed to score more than 1 to kill with. You can do it, and going a bit wider maybe lets you play Fully Operational. I haven't gotten it to work yet.

If you haven't tried this yet, I suggest you give it a shot. It is a very fun deck.

I've been monitoring the meta on Jinteki.net lately, and a common strategy seems to be combining this with Punitive. Either they steal it and you Punitive them, or you score it and you get to Neurospike them.

As Wern212 this card is pretty nice in HB. Now I'm going to talk about how I can win some games with this beauty.

How to kill with this card with Jinteki: Personal Evolution: A review

Jinteki PE does some work for you. It gives you 1 of the x net damage you need to kill. But what else do you need? clicks to play the operation.

If you install, for example House of Knives or Sting! and leave it there in the open (classic old jinteki technique since you can make it look like a Snare! or now a Urtica Cipher) next turn you go "advance, advance, advance: score" and Neurospike looks at you with a disapproving glance.

So the technique has to be another one. Thats where other cards come to help. One of those tools is a HB advancing tool: Seamless Launch. You will have more money and time to play, at least one Neurospike. But that usually doesn't get the kill. That's the HB approach. Not the Jinteki approach.

Here in the Startup format you can relay on La Costa Grid a card that allows you to bake stuff. Usually when there is a La Costa server the runner only contests when there is no advances in the server. Since an advanced Urtica Cipher or Cerebral Overwriter or Snare! -you can advance them- is pretty scary. And usually they are waitin that if it's a trap, that you over install on it to decide go there or not.

If you can sneak there an agenda while they go to RD or HQ and bake some advancements you will save the money and the clics. And then "oh, it was a Sting, 2 damage because the runner stole 1 and the Jinteki PE damage. Then neurospike. And neurospike and neurospike you have the clicks and probably the money. Easier if it's a 2 pointer or 3 pointer agenda. Vulnerability Audit it's good for that in Startup format since you cannot go and use an Obokata Protocol

I think you meant Cerebral Overwriter instead of Cerebral Imaging: Infinite Frontiers

This is crazy, but hard to use. Turning any agenda into Ronin is amazing. However, Mushin no Shin is leaving us, so unless, and possibly even if we get a replacement, the difficulty of setting up advance-Neurospike-Neurospike is significant. We require the credits to fire two Neurospikes and defend an advanced agenda. That's no small task.

So there are two ways to play this card. The more intuitive is to slowroll a 5/3, like Obokata Protocol, then cook it on 4 advancements. Then, murder the runner with both Neurospikes. You can defend Obo with the new Anoetic Void. A potential deck is 6x 3-pointer Restoring Humanity. You don't even require a 7th point: Just set up the combo and kill as the primary wincon.

The other possibility is to play PE. Since you get 1 damage off the score, double Neurospike off a 2-pointer is a total of 5 damage, which is a still a lot and should kill most of the time anyway.

Overall, even with the few reveals we've had so far at the time of writing this, Neurospike is looking to be pretty strong. The fact that even a deck that looks like its trying to score has a kill threat, that doesn't require a run, is a big deal.

Saraswati can sort of work as a Mushin substitute here, though it requires you to use Show of Force or 4/3 agendas